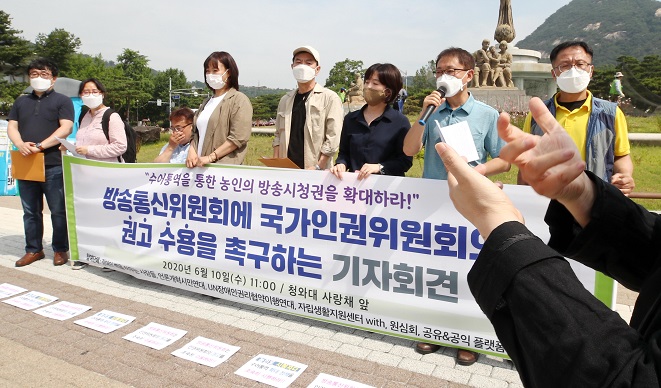 In this file photo taken on June 10, 2020, activists stage a rally to urge South Korea’s terrestrial broadcasters to accept the National Human Rights Commission’s recommendation to provide a sign-language interpretation service on main news programs, in front of the presidential office of Cheong Wa Dae in Seoul. (Yonhap)

SEOUL, Sept. 2 (Korea Bizwire) — South Korea’s three major TV networks — KBS, MBC and SBS — have started or will start a sign-language interpretation service on their prime-time news programs for the convenience of people with disabilities.

MBC said it has begun the real-time sign-language interpretation system on its “News Desk,” which airs at 8 p.m. every day, from Monday.

It is the first time that the public broadcaster has run its key news program with a sign-language interpreter in the right bottom corner. It currently provides the service on morning and mid-day news shows.

“It is too late to start the sign-language interpretation service on ‘News Desk,’” MBC said in a statement released Monday. “We will make constant efforts to help people with and without disabilities watch news programs together.”

KBS, a state-run TV station, and another terrestrial network, SBS, earlier said they will launch the same service for their prime-time news programs on Thursday and later this month, respectively.

The moves came as the National Human Rights Commission in May recommended the broadcasters provide sign-language interpretation on their main news shows to give equal opportunities to hearing-impaired people in watching news programs.

The People’s Coalition for Media Reform, a Seoul-based civic group, welcomed the decision and hoped other cable TV channels adopt the service.

“Those terrestrial channels’ prime-time news programs cover comprehensive news reports on society, economy, culture and international issues, and broadcasters should give equal access to all people regardless of their disabilities,” it said.

“We hope that they are not the last ones to adopt the sign-language interpretation service.”