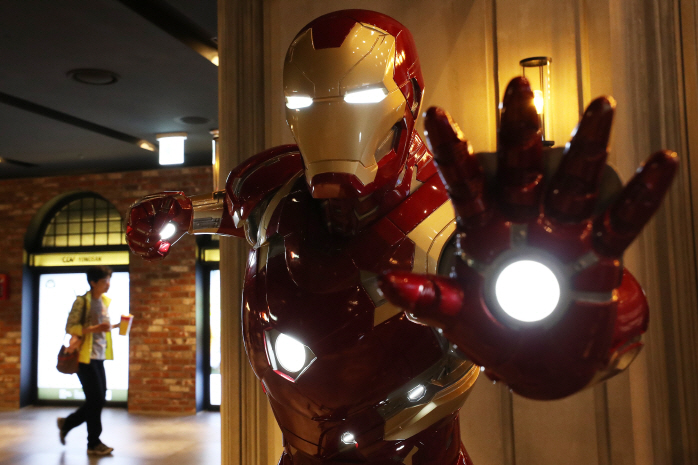 Marvel films are especially popular among South Koreans, so much that South Korea is referred to by many as the ‘Republic of Marvel.’ (Yonhap)

What led the success of the Marvel cinematic universe was “Iron Man”, which gained massive popularity around the world, and drew 4.3 million spectators in South Korea.

“Hulk”, “Thor”, “Captain America”, “Guardians of the Galaxy”, “Ant Man”, “Doctor Strange”, “Spiderman”, and “Black Panther” soon followed to expand the Marvel universe as its popularity reached a point where studios can count on an average of 5 million viewers in Korea for the latest movie in the series.

“Over 10 years of Marvel universe movies has created some sort of a learning effect,” said Kang Yu-jeong, a movie critic.

“The Marvel series draws the attention of the audience by presenting spectators with both expectations about the upcoming storyline as well as the urge to confirm the scenario that the audience already know will happen.”

Marvel heroes were particularly popular when they were together. The idea that heroes with their own movie franchises would team up to become the so-called ‘Avengers’ came as a fresh surprise to the audience.

Marvel films are especially popular among South Koreans, so much that South Korea is referred to by many as the ‘Republic of Marvel.’

“In South Korea, heroes are fighters for justice, which better connects with the fandom here,” said movie critic Jeong Ji-wook.

“South Koreans in their 40s and 50s grew up watching American TV series such as the “Six Million Dollar Man” or the “Bionic Woman”, and are now taking their families to go watch family films of today’s era that are the Marvel films.”

Marvel’s marketing strategy that understood the psychology of the South Korean audience was also part of the company’s success.

Marvel filmed multiple scenes in Seoul for “Avengers: Age of Ultron” in 2016, and cast Claudia Kim, a South Korean actress, in the movie.

In “Black Panther”, released in February of last year, a number of scenes were filmed in the port city of Busan.

The main characters of the movie have made frequent visits to the country whenever a new movie was about to be released. Robert Downey Jr., playing Iron Man, visited South Korea four times to meet with his fans.

“South Korean moviegoers find it special when the country is featured in the outside world, and respond with fervor when they are loved,” said Kang.

“That precisely matched Marvel’s marketing strategy. Now, South Koreans who began watching the films when they were 10 years old are now in their 20s. We expect that Marvel’s popularity will continue for the next 10 years.”