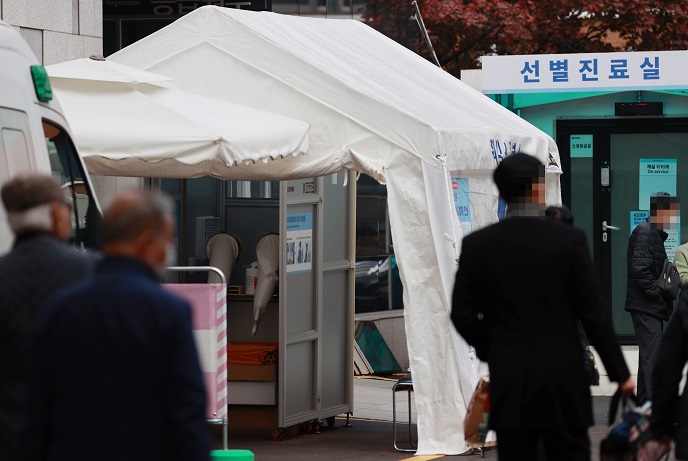 South Korea confirmed 89 COVID-19 cases, raising the total caseload to 27,284, according to the Korea Disease Control and Prevention Agency (KDCA). One more patient died, raising the death toll to 477.

The number of daily virus cases had stayed in the triple digits from Wednesday through Friday.

Of the 89 new cases Saturday, local infections stood at 72, while the rest were imported cases.

The greater Seoul area — home to half of South Korea’s 51 million population — accounted for 51 new cases out of 72 locally transmitted cases.

As of noon Saturday, an insurance company in western Seoul had reported 26 cases, including 14 employees of the company and eight of their family members.

A total of 19 patients were traced to a brokerage house in western Seoul, up five from a day earlier.

The KDCA said it plans to expand COVID-19 tests on all patients and people working at senior care hospitals and other facilities vulnerable to the coronavirus across the country. The public health agency said tests will be conducted on a regular basis.

So far, 38 COVID-19 cases have been confirmed from three nursing hospitals and four other facilities in Seoul, the surrounding Gyeonggi Province, the southeastern port city of Busan and South Chungcheong Province.

Of the 17 imported cases, 11 were foreigners and six were South Koreans. They came from the United States, Russia, Myanmar, Afghanistan, Saudi Arabia, France, Poland, Ukraine, Hungary, Algeria, Liberia and Ghana.

The KDCA said the total number of people released from quarantine after making full recoveries stood at 24,910, up 89 from the previous day. 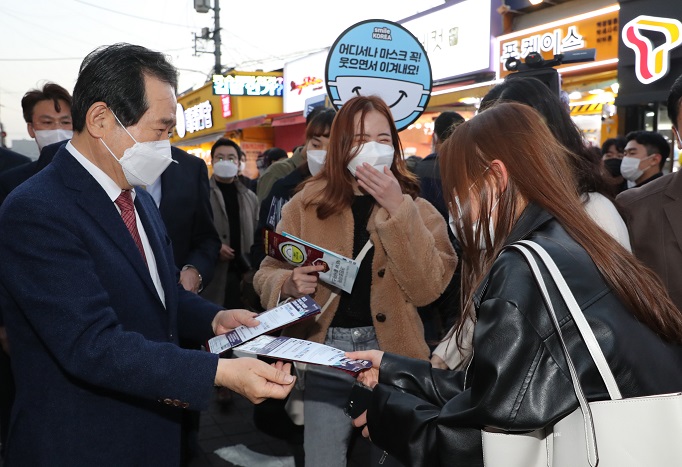 Prime Minister Chung Sye-kyun (L) hands out face masks to citizens during an antivirus campaign in the Hongdae district of Seoul on Nov. 7, 2020. (Yonhap)

Currently, South Korea is under Level 1, except the central city of Cheonan and the adjacent city Asan, where social distancing rules were lifted to Level 1.5 earlier this week amid a surge in COVID-19 cases there.

Level 1 — the lowest in the five-tier scheme — signifies a controllable level of transmission that allows people to carry on with their ordinary lives while wearing masks and following social distancing rules at designated facilities.

Under Level 1.5, the operation of multiuse facilities is restricted. At Level 2, the pandemic is considered to be spreading nationwide, and nonessential outdoor visits and gatherings are discouraged in the affected zones.

Level 2.5 will be put in place when the situation is considered to be exceeding the health system’s routine response levels, and the government will urge the public to remain at home.

At Level 3, which will be imposed in the event that more than 800 new daily cases are reported for a week, the nation will effectively be placed on lockdown.

He handed out face masks to citizens in the bustling western Seoul district of Hongdae.

“I hope we will overcome COVID-19 with the power of wearing masks, which is a surefire method for COVID-19 prevention,” he said.