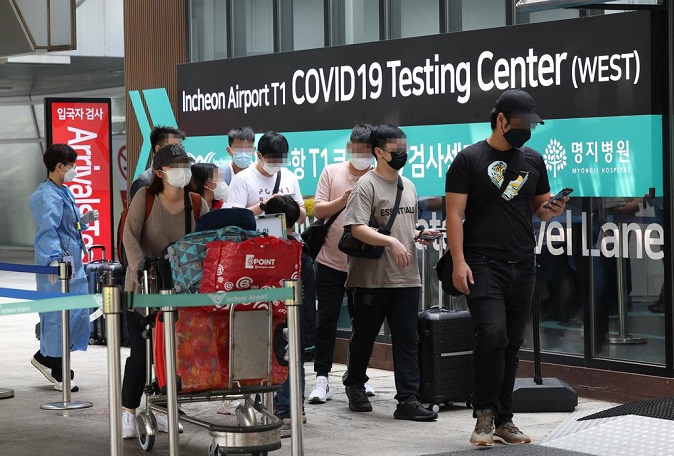 Travelers arriving in South Korea head to a coronavirus testing center at Incheon International Airport, some 40 kilometers west of Seoul, on May 23, 2022. (Yonhap)

SEOUL, May 24 (Korea Bizwire) — South Korea’s new COVID-19 cases continued a downward trend Tuesday, dropping more than 5,000 cases from a week ago, as the omicron-fueled surge has lost steam since mid-March.

The country added 26,344 new infections, including 43 cases from overseas, bringing the total caseload to 17,993,985, the Korea Disease Control and Prevention Agency (KDCA) said.

Tuesday’s tally went up 2.6 times from the previous day due to more virus tests. But it hit a 16-week low for Tuesday and declined 24.9 percent from a week earlier, in an apparent sign of the pandemic loosening its grip on the country.

South Korea’s daily caseload peaked at over 621,000 on March 17, driven by the rapid spread of the omicron variant.

The country added 19 deaths from COVID-19, taking the total to 24,006. The fatality rate stood at 0.13 percent. The number of critically ill patients stood at 232, the KDCA said.

As of 9 p.m., South Korea had reported 23,348 new coronavirus cases, down 2,084 from the same time a day earlier, according to local governments and health authorities. Daily infections are counted until midnight and announced the following morning.

On Tuesday, the KDCA lowered the pandemic risk level to the second-lowest of its five-tier system nationwide.

It was the first time the risk level was assessed as “low” for the whole country since the government introduced the system in November.

Last week’s seven-day average was 181,000 cases, marking nine consecutive weeks of decline. The reproduction rate stood at 0.83, below 1 for eight weeks in a row.

The KDCA said an additional 18 cases of omicron subvariants were detected in the country. 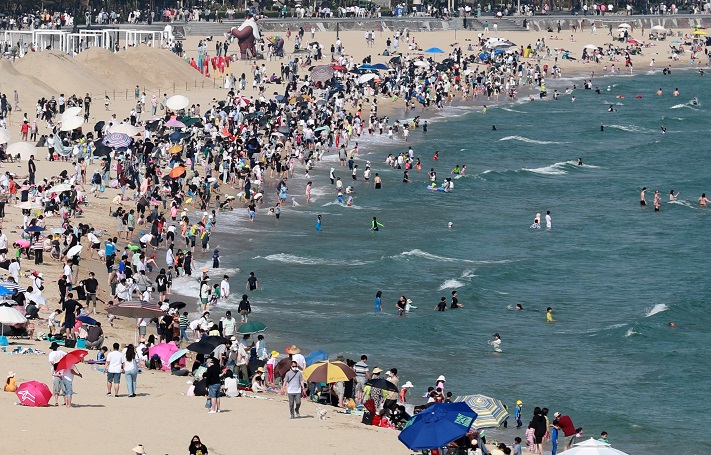 Haeundae Beach in the southern port city of Busan is crowded on May 22, 2022. (Yonhap)

The government said it has stepped up the screening process for international travelers entering the country for early detection of the virus variants.

Starting Monday, South Korea began to accept rapid antigen tests, taken at a hospital or clinic, from all travelers entering the country.

A supervised negative COVID-19 result must be issued within 24 hours prior to the departure date. Previously, a PCR test result was required.

Also, the government extended the temporary measure of allowing in-person visits without any barriers at nursing homes and senior care hospitals for the time being.

Last month, South Korea ended most of its virus restrictions to move on from the COVID-19 pandemic.

Still, the seven-day self-isolation for COVID-19 patients remains in effect until June 20 due to a possible resurgence of the virus.

Of the locally transmitted cases, Seoul accounted for 4,271 cases, with its surrounding Gyeonggi Province reporting 6,031 cases. There were also 1,035 additional patients from Incheon, 40 kilometers west of the capital city.

As of midnight Monday, 44.57 million, or 86.9 percent of the population, had completed the full two-dose vaccinations, and 33.26 million, representing 64.8 percent, had received their first booster shots.