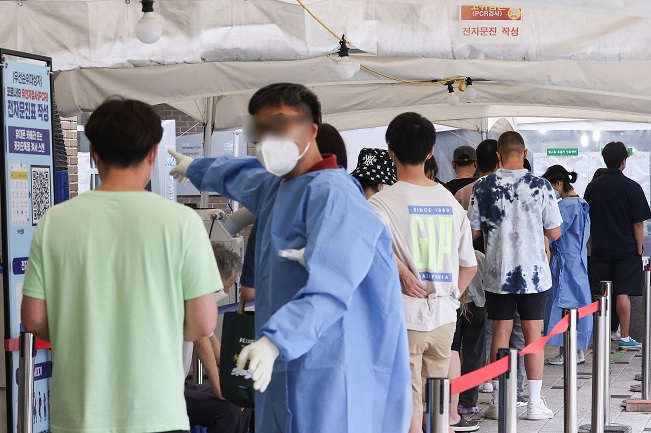 SEOUL, Aug. 11 (Korea Bizwire) — The number of new daily COVID-19 cases in South Korea fell Thursday after reaching a four-month record high the previous day, but new deaths climbed to a three-month high amid the fast spread of a highly contagious omicron subvariant.

The number of seriously ill patients also increased to 418, up from 402 on Wednesday. The tally was also the largest in three months.

Health authorities said about 90 percent of the new COVID-19 deaths came from highly vulnerable people, including people aged 60 and older and those with underlying health conditions.

As of 9 p.m. Thursday, the country had reported 124,857 additional cases, down 6,661 from the same time the previous day, according to health authorities and provincial governments.

Daily virus cases were on the decline after peaking at around 620,000 in mid-March. But infections have spiked again in recent weeks as the April lifting of almost all COVID-19 restrictions has increased people’s movements and outdoor activities.

It said people aged 17 and under and unvaccinated people accounted for half of the total reinfection cases.

Imported cases have continued to rise in recent weeks, with such infections hitting a record high of 615 Wednesday. Imported cases stayed over the 400s this month.

About 6.4 million people, or 12.5 percent of the population, had gotten their second booster shots, the KDCA said.

Health authorities said daily virus cases are likely to peak at about 200,000 this month. But some experts forecast COVID-19 infections could exceed the mark in late August.