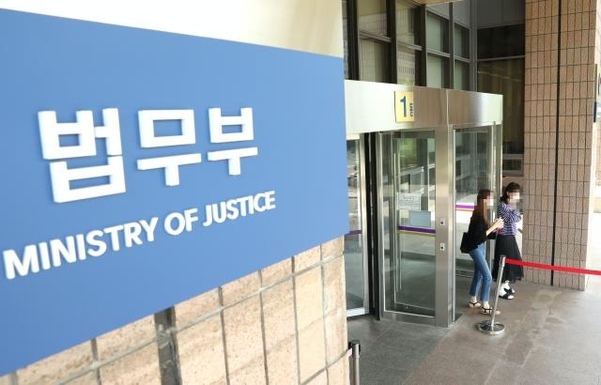 The Ministry of Justice office in Gwacheon, south of Seoul (Yonhap)

SEOUL, July 21 (Korea Bizwire) — Foreign-born underage Koreans will be given wider opportunities to choose South Korean nationality under a planned revision of the Nationality Act, the Ministry of Justice said Tuesday.

The ministry said the legal revision will allow minor ethnic Koreans who acquired foreign nationality after being born and residing overseas to file the nationality acquisition report with the Seoul government to help prevent them from losing Korean nationality against their intentions.

The ministry made a prior announcement of revisions to the Nationality Act and related ordinances, which call for making those Korean minors eligible for the nationality acquisition report.

The nationality acquisition report is a system for South Koreans who have acquired foreign nationality for involuntary reasons, such as marriage or adoption, to report their interest in retaining Korean nationality to the government.

“The ministry will amend the system to minimize cases of underage Koreans losing their Korean nationality under the laws of their host countries, regardless of their true will,” a ministry official said.

The period during which nationality retention reports can be submitted after acquiring foreign citizenship will also be increased from the current six months to one year to help reduce the involuntary loss of opportunities.

Since the nationality acquisition report system was introduced in 1998, a total of 1,020 such reports have been received.

Meanwhile, the ministry said it will introduce non-face-to-face methods to its nationality affairs in consideration of the spread of the coronavirus outbreak.

It said it has established legal grounds for online applications for nationality and the omission of nationality certificate awarding ceremonies.

In addition, all people who newly become South Korean citizens will be given a unified certificate of South Korean nationality, regardless of their acquisition type.

So far, naturalized Korean citizens and South Koreans who recovered nationality have been given different certificates.

The ministry said it has also strengthened its screening of foreigners applying for naturalization by adding new factors, such as livelihood maintenance capabilities, criminal records and social contribution activities, to its assessment criteria.

Retired civil servants and other private sector specialists will also participate in the interviews of naturalization applicants, it added.