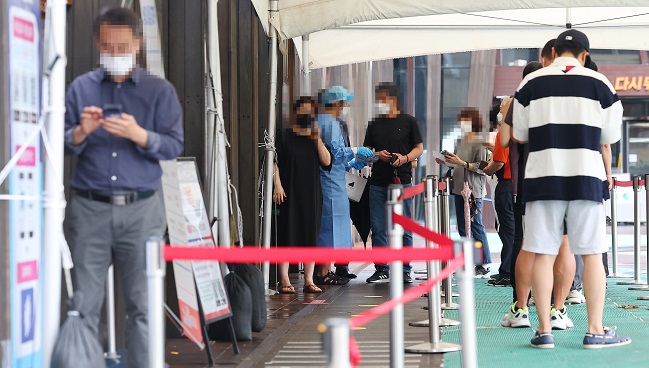 People wait in line for tests at a COVID-19 testing center in southeastern Seoul on Aug. 9, 2022. (Yonhap)

The number of cases tends to fall on Mondays, due to fewer tests, and rebound throughout the weekdays.

The number of seriously ill patients also rose to 364, up from 324 the previous day.

As of 9 p.m. Tuesday, the country had reported 146,364 additional cases, up 3,196 from the same time the previous day, according to health authorities and provincial governments. Daily virus cases are counted until midnight and announced the following morning.

Daily COVID-19 cases have trended downward after peaking at around 620,000 in mid-March. But since authorities lifted almost all anti-pandemic curbs in April, infections have showed signs of spiking again, apparently due to increased movement and public gatherings.

Imported cases have been on the rise with their daily number standing in the 400-600 range this month, which is sharply higher than before the curbs were lifted.

Health authorities said the latest wave of infections could peak this week at the earliest.

About 4.26 million people, or 12.2 percent of the population, had gotten their second booster shots, the KDCA said.