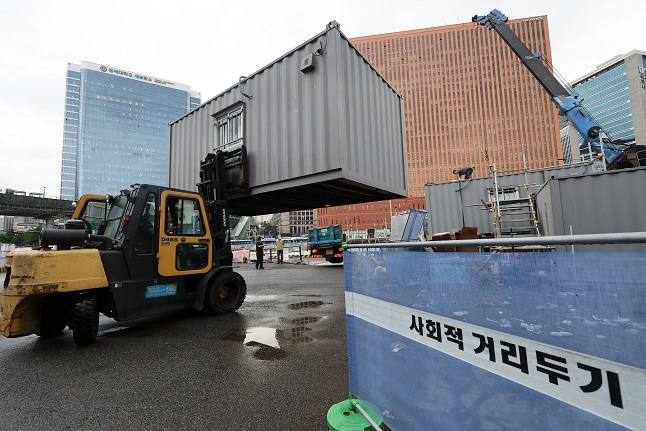 Workers remove a container building used as a makeshift clinic for coronavirus tests in front of Seoul Station on July 1, 2022, as South Korea has seen COVID-19 cases declining. (Yonhap)

Though the virus curve is generally trending downward, Friday’s figure is up by 2,307 cases from a week ago and 2,334 from two weeks ago.

The country’s case curve hit a peak in mid-March with more than 621,000 cases, and virus activity has since subsided. But the KDCA has said the pace of decline has recently slowed down amid waning immunity and eased social distancing rules.

The seven-day average of cases for the week ending Friday came in at 7,990, up by 930 from the week before, according to the KDCA. 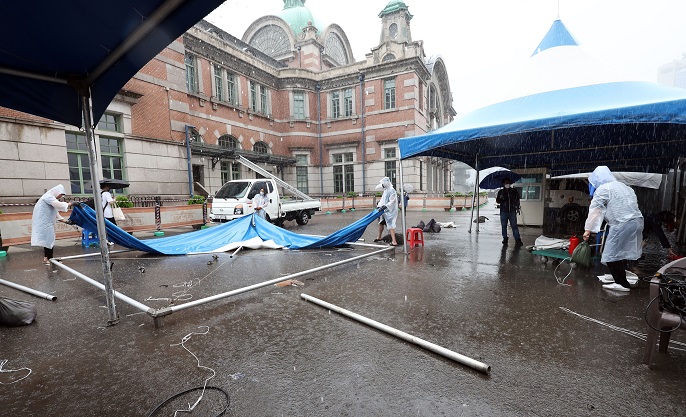 Health authorities asked elderly people to get their second booster shots before the summer travel season starts next month.

As of Friday, 44.62 million, or 87 percent of the population, had completed the full two-dose vaccinations, and 33.37 million, or 65 percent, had received their first booster shots.

About 4.4 million people, or 8.6 percent of the population, had gotten their second booster shots, according to the KDCA.

Of the 9,382 locally transmitted cases, Seoul accounted for 2,333 cases, with the surrounding Gyeonggi Province reporting 2,453 cases. There were 436 infections in Incheon, 40 kilometers west of Seoul.

The KDCA reported eight deaths from COVID-19, raising the death toll to 24,555. The fatality rate stood at 0.13 percent.

The number of critically ill patients came to 56, up by two from a day ago.

As of 9 p.m., the country had reported 10,202 new infections, 1,218 more than the same time the previous day and the first number over 10,000 since June 8 for the time point. Daily infection cases are counted until midnight and announced the following morning.