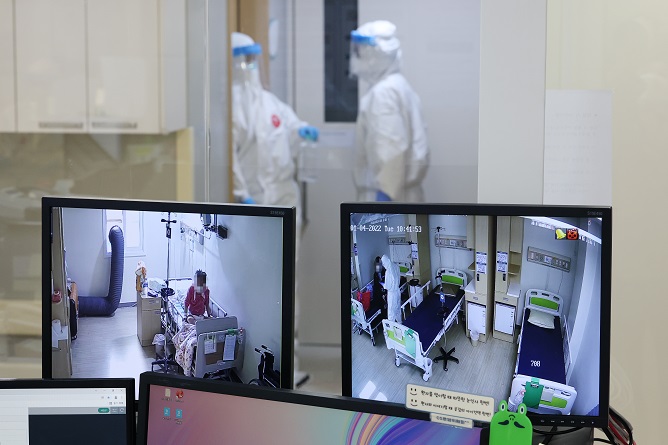 This file photo shows an isolation room for COVID-19 patients at a local hospital. (Yonhap)

The country reported 327,549 new COVID-19 infections, including 327,490 local cases, raising the total caseload to 5,539,650, according to the Korea Disease Control and Prevention Agency (KDCA).

Daily infections exceeded the 300,000 mark for the first time the previous day with 342,446 cases, when voters went to the polls to elect a new president.

The accumulated virus cases also surpassed the 5 million mark on that day, meaning one-tenth of the country’s 52 million population has been infected with the virus.

The omicron-fueled spike in infections has recently led to more COVID-19 deaths, and severe and critical virus cases.

The country added 206 more COVID-19 deaths, raising the total number to 9,646, according to the KDCA. The fatality rate was 0.17 percent.

As of 9 p.m. Thursday, the country had reported 258,539 more cases, down 46,652 from the same time the previous day, according to health authorities and provincial governments. Daily cases are counted until midnight and announced the following morning.

The KDCA said Thursday the current omicron wave was nearing its peak and the curve could start to flatten after two weeks.

Since omicron became the dominant variant in mid-January, new infections have been doubling each week. But the growth rate has somewhat slowed since late last month, the KDCA said.

In a meeting with heads of general hospitals in the capital area earlier in the day, Health Minister Kwon Deok-cheol stressed the need to change the current treatment system for COVID-19 patients to better use scarce medical resources.

“Treating COVID-19 patients only in negative pressure rooms is neither sustainable nor effective,” he said.

“Now is the time for the entire medical staff at a hospital to start treating virus patients.” 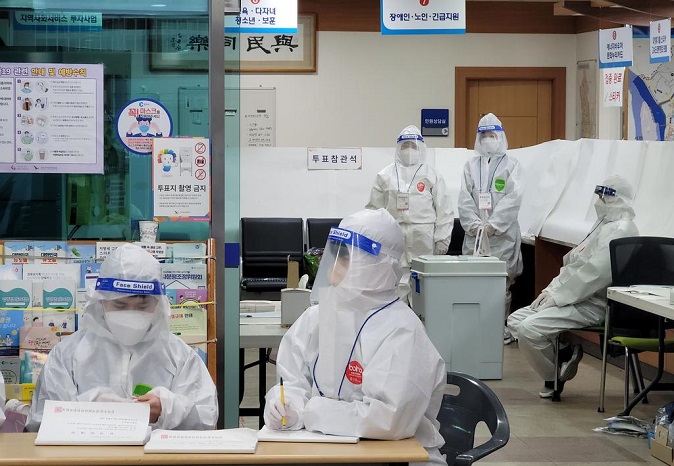 Election officials in protective gear are ready to receive voters infected with the coronavirus at a polling station for the presidential election in Chuncheon, 85 kilometers northeast of Seoul, on March 9, 2022. (Yonhap)

To lay the groundwork for the change, the KCDA last week revised its guidelines to allow the admission of virus patients to normal wards.

The KDCA has recently raised the country’s risk level of the pandemic to the highest, as omicron is causing record-breaking numbers of new daily cases.

It also scrapped its rigorous contact tracing program, which was successful in containing the spread of the virus in the early stages of the pandemic but is deemed unsustainable amid the unrelenting omicron surge.

It instead shifted its focus to preventing deaths and using medical resources to treat more serious cases by ramping up the use of rapid antigen self-test kits and at-home treatment.

Despite the spike in virus cases, the government relaxed part of its antivirus regulations last week to help struggling small businesses. Cafes and restaurants, among others, have been allowed to run until 11 p.m. since Saturday.

Of the locally transmitted cases reported, Seoul reported 66,859 new cases. The surrounding Gyeonggi Province and the western city of Incheon added 88,141 and 21,974 new infections, respectively. Cases from overseas went up 59 to 30,023.

As of the midnight, 31.9 million people, or 62.2 percent of the country’s 52 million population, had received booster shots. The number of fully vaccinated people came to 44.4 million, accounting for 86.5 percent.