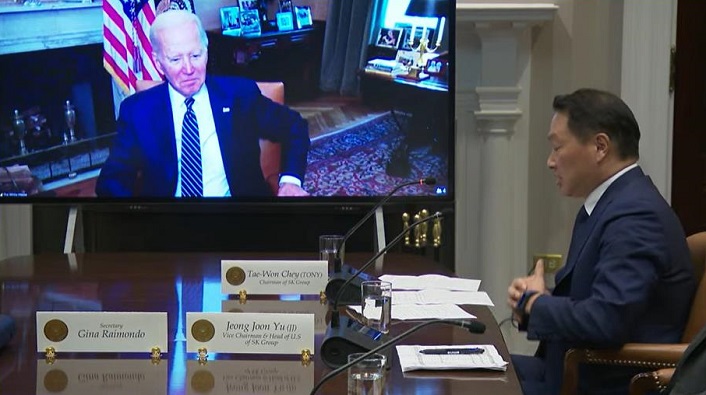 South Korea’s SK Group Chairman Chey Tae-won speaks in a virtual meeting with U.S. President Joe Biden at the White House on July 26, 2022, in this image captured from the website of the White House. (Yonhap)

Biden welcomed the announcement, calling it one of the most “significant investments” ever seen in the U.S.

“Today we are announcing another $22 billion in new investment in the U.S.,” Chey told the U.S. leader.

“This means that SK will invest nearly $30 billion going forward, expanding on our recent announcement of $7 billion investment in EV batteries,” he added.

Biden, however, took part virtually as he continues to recover from COVID-19 since being diagnosed late last week.

He hailed the South Korean conglomerate’s investment plan, noting it will create some 16,000 new jobs in the U.S. in the next three years.

“SK has already committed $30 billion in investment here, and today they are announcing another $22 billion in addition. That will grow their U.S. workforce from 4,000 to 20,000 workers by 2025,” Biden said.

“Today’s announcement is also proof that America’s back to working with our allies,” he added.

In the meeting with Biden, Chey said SK will spend $15 billion to boost the semiconductor ecosystem, including research and development programs, materials, advanced packaging and test facilities.

“Our countries fought side-by-side during the terrible conflict, and now we have worked side-by-side to build the technologies and infrastructures that will power the 21st century economy around the world,” Chey said at the meeting as shown in a White House release.

“Our cooperation will make the supply chain in both our countries more resilient in critical technologies,” Chey said. 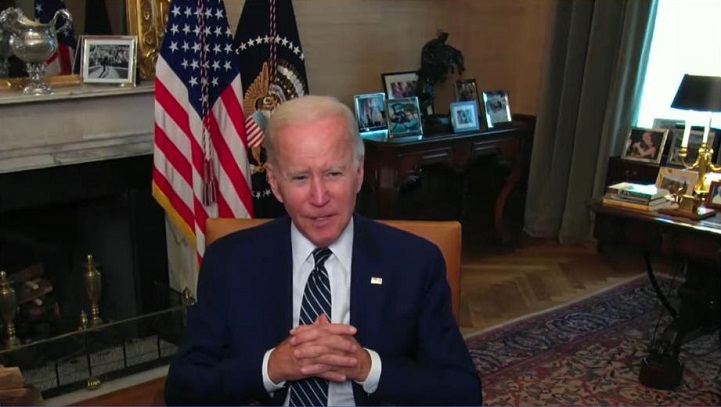 U.S. President Joe Biden speaks in a virtual meeting with Chey Tae-won, chairman of South Korean conglomerate SK Group, at the White House on July 26, 2022, in this image captured from the website of the White House. (Yonhap)

The rest of the investment will be spent on bolstering its edge in bioscience and biopharmaceutical sectors in the U.S. market, including the development of treatment for cell and gene therapy.

Chey, the chief of South Korea’s second-largest conglomerate after Samsung, said last year that SK plans to invest $52 billion in America through 2030.

SK On Co., the battery-making arm, has formed an $8.9 billion joint venture with Ford Motor Co. to build three EV battery production plants in the U.S. by 2025, one in Tennessee and two others in Kentucky.

SK On is also building two battery cell plants in Georgia, with the construction set to be completed by next year.

In May, SK announced it will invest 247 trillion won (US$188.4 billion) in semiconductor, EV battery and bio businesses in its blueprint for the next five years, including 68 trillion won earmarked for foreign markets.

At the meeting, Biden also sought advice from the South Korean business leader on ways to attract more foreign investment to the U.S.

Chey highlighted the need for more trained workers with the right skill set who can work in high-tech industries, such as semiconductors and EV batteries.