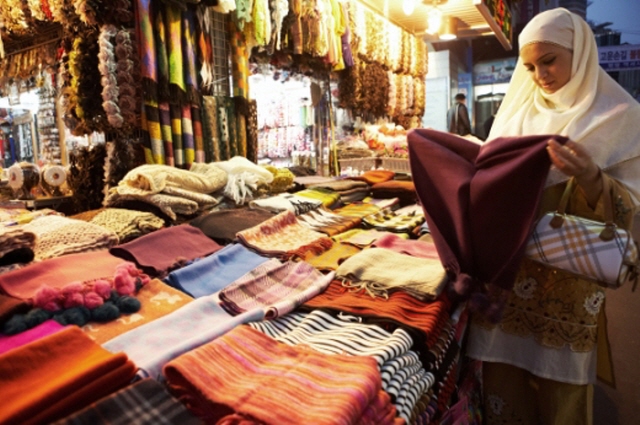 SEOUL, Aug. 21 (Korea Bizwire) — The government and private companies alike are moving to accommodate a rise in Muslim tourists who have become a new source of growth for South Korea’s tourism industry that has been hit hard by the departure of Chinese travelers, with calls being made to overcome shortcomings in local infrastructure critical to meet the new influx.

Muslim visitors to South Korea have been steadily growing in number, accounting for 5.7 percent of foreign travelers last year. The latest figure is up from 5.3 percent in 2014 and from 5.6 percent in 2015, according to the Korea Tourism Organization (KTO).

The visits are a highly welcome development for the local industry that has been coping with a general slump after the number of Chinese travelers coming to the country fell off sharply starting in March. Beijing is retaliating against South Korea’s decision to host a U.S. missile defense system on its soil by restricting its nationals from going to the Asian neighbor. Reflecting this, the number of Chinese visitors to South Korea dropped 66.4 percent in June from a year ago.

To attract Muslim travelers, however, South Korea needs to effectively and quickly set up various facilities that can meet the specific needs of the visitors, industry officials stressed. The point becomes all the more evident when compared with other countries, they argued.

According to the KTO, South Korea has just 28 prayer rooms across the country that are fit to be used by Muslims. Japan has 57. The usable prayer rooms in South Korea include 11 at major tourism locations, 2 at airports and 15 operated by the local Islamic community. In Japan, there are 11 such facilities at airports alone and 14 at giant shopping malls.

Taiwan, which is stepping up exchanges with Southeast Asian countries, added prayer rooms at its major information centers, airports and train stations.

Muslim travelers do not eat pork or consume alcohol and need halal restaurants that serve foods prepared under Islamic Sharia rules, officials say. They said despite the rise in demand, there are still too few South Korean establishments that cater to such requirements.

As of July, South Korea had 252 halal restaurants in the country, with 117 of them just added this year. About 75 percent of them are outside Seoul.

“Praying five times a day is very important to Muslims. Whether a tourist destination has a prayer room is bound to make a difference for those thinking of coming here,” a KTO official said. “The fact that many local restaurants serve alcohol can also make them feel uncomfortable.”

Businesses are beginning to catch up to the idea, according to the officials. Lotte Department Store recently opened a prayer room at its Jamsil branch in southern Seoul, becoming the first big retailer to do so. Amusement parks popular with foreigners, including Everland Resort and Lotte World, already operate prayer facilities. Nami Island, another tourist destination for travelers, opened a prayer room in 2011.

A rating system is in place for halal restaurants to allow Muslim customers to choose where they want to dine.

Industry insiders also call for efforts to remove misunderstandings about Muslims that sometimes cause complaints about measures to accommodate them, mainly that they are somehow linked to terrorist organizations.

“Operating prayer rooms for Muslims is a service to ease any inconveniences to people visiting South Korea. It’s not about religion,” a KTO official said. “We need to understand about cultures shared by 1.7 billion people across the world in this age of borderless exchanges between peoples,” he said.