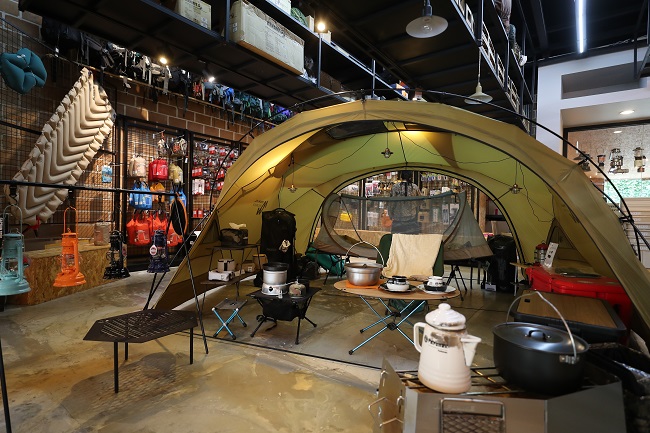 This undated file photo shows a tent and other camping gear on display at a store in Seoul. (Yonhap)

Asia’s fourth-largest economy exported and imported US$399 million worth of camping equipment last year, an all-time high and up 40 percent from the previous year, according to the report from the Korea Trade Statistics Promotion Institute.

In the first half of this year alone, the country’s trade in camping gear stood at $293 million, above the $285 million registered in 2019.

Compared with the pre-pandemic first half of 2019, exports soared 75.1 percent in the January-June period, with imports spiking 136.2 percent.

The report forecast this year’s exports and imports of camping goods to be well above last year’s amount to reach a new record.

South Korea’s exports of camping equipment came to $102 million in the first half of this year, up 84.7 percent from a year earlier.

Imports of camping goods skyrocketed 105.2 percent on-year to $191 million, resulting in a trade deficit of $90 million in the sector.

Major export destinations were the United States and Japan in the first half, with China, Vietnam and the U.S. exporting large amounts of goods to South Korea, according to the report.

The report attributed the sharp rise in the camping goods trade to the COVID-19 outbreak, which has made overseas travel impossible and prompted people to engage in more outdoor activities.