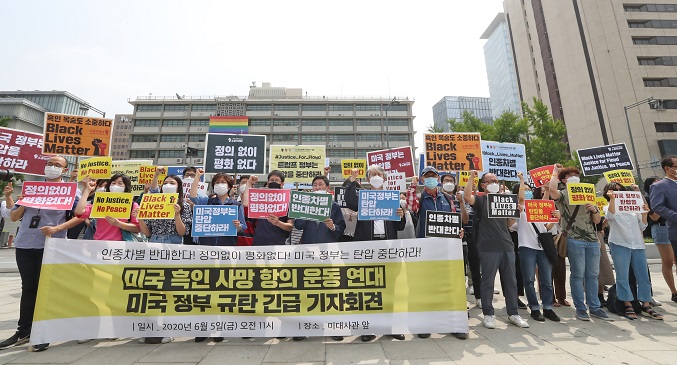 South Korean activists stage a protest in front of the U.S. Embassy in Seoul on June 5, 2020, to rebuke the U.S. government over the death of George Floyd in police custody in Minneapolis. (Yonhap)

SEOUL, June 5 (Korea Bizwire) — A group of South Korean activists will hold a rally here this weekend to support the Black Lives Matter (BLM) movement in the United States and remember George Floyd.

Organizers said Friday they plan to gather at the central Seoul neighborhood of Myeongdong at 4 p.m. on Saturday and march toward Cheonggye Stream, also in central Seoul.

The group had initially planned to march from Seoul City Hall to the U.S. Embassy but changed their plans as rallies in the area have been banned amid the new coronavirus pandemic.

“We want to show solidarity with the U.S. movement and remember Floyd who was sacrificed due to racism,” said Shim Ji-hoon, 34, who suggested the event.

Shim said organizers plan to use on-site donations to buy masks and pickets and donate the remainder to relevant organizations.

The BLM movement has been spreading across the U.S. and around the world following the death of George Floyd, a black American at the hands of a white police officer.

K-pop musicians, including BTS, Crush and Amber, have also voiced support for the movement, condemning racism and paying homage to African-American culture as an important source of inspiration for modern day K-pop.