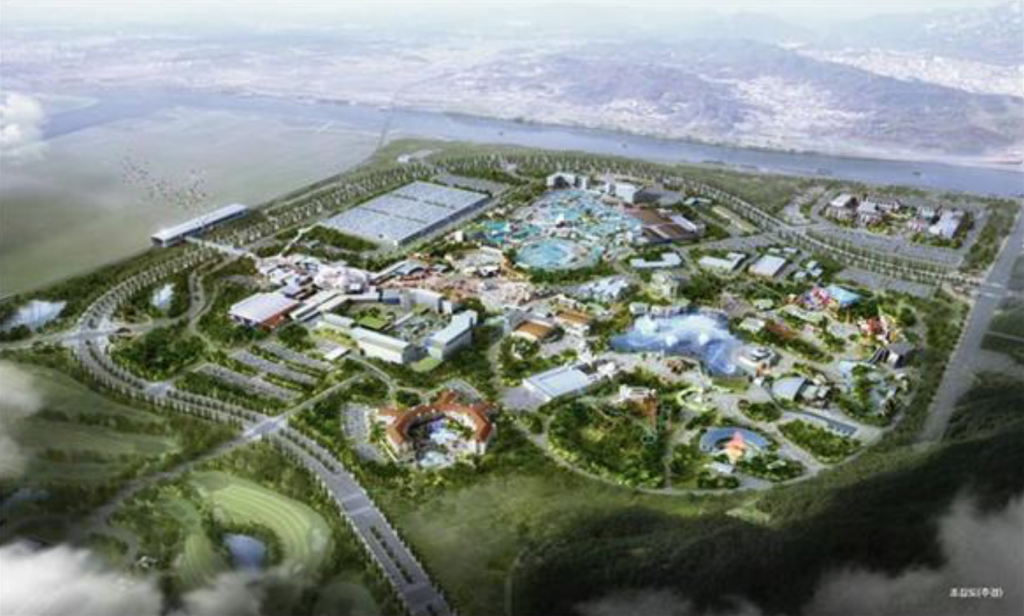 K-Water estimates around 5 trillion won (US$4.45 billion) will be invested in the complex envisioned on a 4.2 square-kilometer plot, which will include the Universal Studio theme park and a Korean pop concert arena, as well as accommodations, a golf resort, a water park and a shopping center. (image: K-water)

DAEJEON, Aug. 23 (Korea Bizwire) – South Korea is facing rough sailing in its ambitious plan to build a Universal Studios theme park south of Seoul due to a row over how to bankroll the big-budget project, sources said Tuesday.

Korea Water Resources Corp. (K-Water), the state-run water resource management company, is pushing to build the amusement park in Songsan Green City, an industrial complex being developed on its own land in Hwaseong, about 60 kilometers south of Seoul, by 2020.

K-Water estimates around 5 trillion won (US$4.45 billion) will be invested in the complex envisioned on a 4.2 square-kilometer plot, which will include the Universal Studio theme park and a Korean pop concert arena, as well as accommodations, a golf resort, a water park and a shopping center.

According to K-Water, both sides had planned to sign a formal contract by the end of August, but they remain divided over the project’s financing. K-water said it has agreed with the consortium to extend the negotiation deadline.

Watchers said the biggest hurdle to a formal deal is whether the state-run Korea Development Bank (KDB) will be able to fund part of the cost as it is playing a leading role in South Korea’s restructuring of troubled shipbuilders, shipping lines and other companies.

“At the moment, the touchiest issue is whether the consortium will be able to receive state funding,” a consortium official said. “We are hoping for good news before long as related government agencies are discussing the issue in earnest.”

A lack of state funding may make it difficult for the consortium to raise the necessary money, potentially derailing the project entirely, they pointed out.

In an effort to make the project more viable, the government has decided to provide funding and infrastructure support, as well as offer incentives by designating the site as a foreign investment zone. K-Water has also offered the land to cut the construction cost.

The plan for the theme park was floated in 2007 amid hopes it would be up and running in 2012, but the project was delayed by the global financial crisis and put on ice in 2012 over funding. But South Korea has again been pushing for the project after President Park Geun-hye, the then-ruling-party candidate, offered it as one of her promises for the presidential election in December that year.