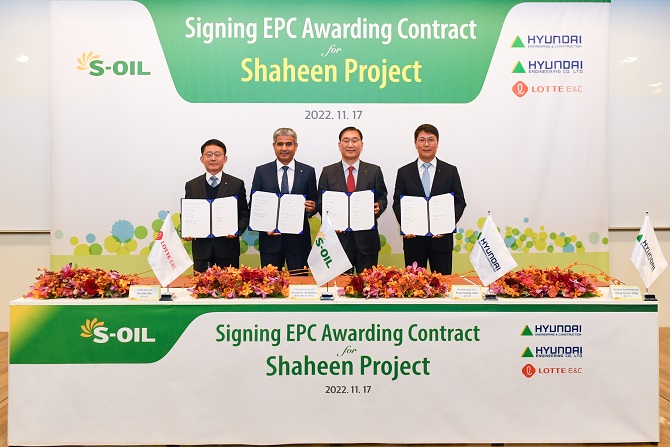 SEOUL, Nov. 17 (Korea Bizwire) — S-Oil Corp., a major South Korea-based refiner, unveiled Thursday a US$7 billion project to build a large-scale petrochemical plant in the country’s southeast, in what will be a milestone in its downstream expansion from oil refining-oriented to petrochemicals.

The Shaheen Project aims to build a steam cracking facility to produce up to 3.2 million tons a year of primary building blocks for petrochemical products, including ethylene and polyethylene, in S-Oil’s main complex in the industrial city of Ulsan, about 300 kilometers southeast of Seoul, the Seoul-based subsidiary of Saudi Arabian Oil Co. (Aramco) said.

The decision was finalized upon the approval of the board of directors at a meeting on Wednesday, S-Oil said. Shaheen means a hawk in Arabic.

The project will start next year for completion set for 2026.

“We have taken the first step in the long journey ahead for the development,” S-Oil CEO Hussain Al-Qahtani said in a release.

“I’m confident that the Shaheen Project will contribute to expanding our business portfolio into petrochemicals and achieving an industry-leading energy efficiency,” Al-Qahtani said.

The announcement coincided with the visit by Saudi Crown Prince Mohammed bin Salman, who arrived here late Wednesday on a trip expected to center on enhancing business ties with Korean firms.

Saudi Aramco is 94 percent owned by the Saudi state.

The steam cracker will produce basic petrochemical feedstock, such as ethylene, propylene, butadiene and benzene, from naphtha and off-gas.

They are types of primary petrochemicals used as feedstock for a wide range of products from plastics, synthetic rubber and fibers to drugs.

It will also produce polyethylene the most common plastic widely used in packaging. 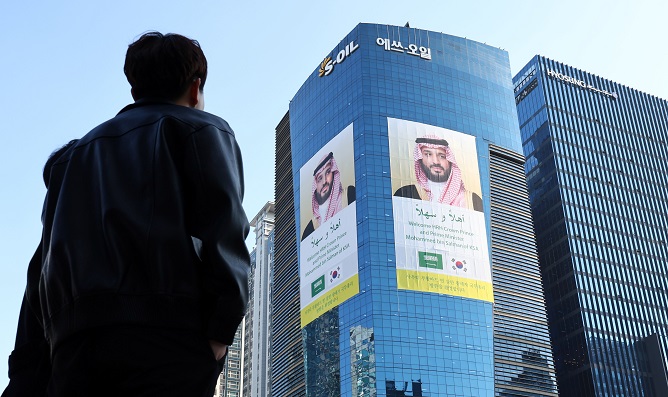 An S-Oil advertisement welcoming Saudi Arabian Crown Prince Mohammed bin Salman’s visit to South Korea is hung on the outer wall of the Aramco-owned oil refiner’s headquarters in Seoul on Nov. 16, 2022, one day ahead of his visit to Seoul to meet with the heads of South Korea’s leading conglomerates in relation to construction projects in Neom, a Saudi smart city project overseen by the crown prince. (Yonhap)

S-Oil had begun to push for the Shaheen project as early as around 2020 but experienced hiccups due to the COVID-19 outbreak and subsequent border lockdowns.

The Shaheen project is S-Oil’s second-phase investment in petrochemical expansion after it spent $4 billion for facility expansion to produce high value-added petrochemical products, such as propylene, propylene oxide and polypropylene, by reprocessing low-value residue oil, like heavy fuel, from crude oil refining.

The project will help S-Oil increase the petrochemical portion of the business to 25 percent by 2030 from the current level of 12 percent, the refiner said.

S-Oil, the third-largest refiner in South Korea, has been ramping up to shift its focus from the traditional oil refining to petrochemical production and other green energy areas like hydrogen as a strategy to diversify its future growth engines.

Saudi Aramco will provide its advanced technology designed to convert crude oil to petrochemical products under the memorandum of understanding inked with S-Oil early this year for collaboration on hydrogen and other alternative low-carbon energy.