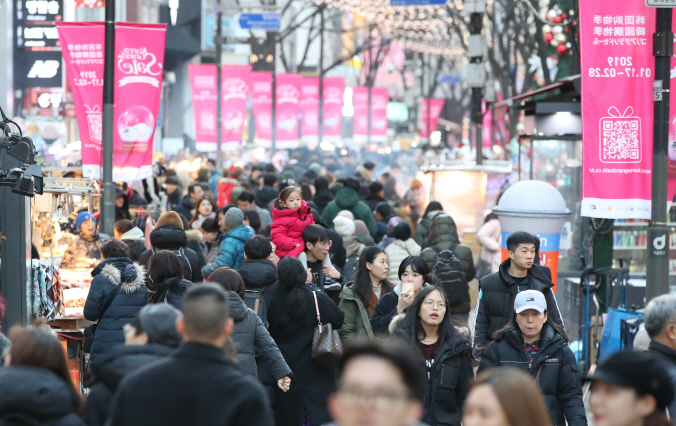 A main street in the shopping district of Myeong-dong in central Seoul on a weekend during the Korea Grand Sale 2019. (Yonhap)

Sales from the Korea Grand Sale 2019 came to 1.25 trillion won, compared with 900.7 billion won the previous year, according to the data from the Ministry of Culture, Sports and Tourism and the Visit Korea Committee.

It is the first sales figure over the 1-trillion won threshold since the annual shopping event began in 2011.

In collaboration with local retailers, air passenger carriers and other tourism-related companies, the government puts on Korean Grand Sale every year to woo foreign tourists during the low season from January to February.

This year’s event ran from Jan. 17-Feb. 28, with the participation of a record-high number of 912 companies.

The sales feat had the effect of inducing 2.14 trillion-won worth of local production and creating jobs for 28,698 people, according to the data.

Under the theme, “Travel, Taste, Touch,” this year, foreign tourists were offered discounts and benefits in shopping, flights, accommodation as well as eating out in Seoul, metropolitan areas and major cities across the country.

This year’s event came with a new service, Korean Tour Card, which allowed foreigners easier access to all types of public transport.

“Korea Grand Sale is stepping up the level of satisfaction for foreign shoppers and inducing their consumption here through programs that fuse the Korean Wave with shopping and tourism,” an official at the committee said, referring to the phenomenon of global popularity of Korean popular culture content, also known as “hallyu.”