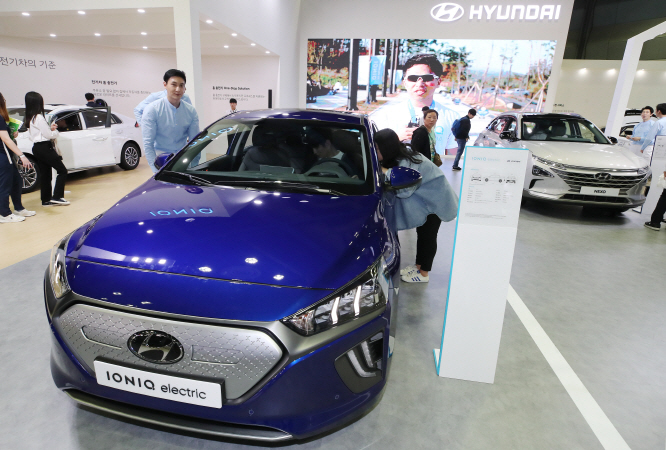 Visitors take a look at Hyundai Motor’s Ioniq electric car displayed at the EV Trend Korea exhibition in southern Seoul on May 2, 2019. (Yonhap)

SEOUL, Jul. 21 (Korea Bizwire) — Sales of environment-friendly cars in South Korea jumped 30 percent in the first six months of the year on the back of strong demand for electric vehicles (EVs), industry data showed Sunday.

The number of environmentally friendly vehicles, such as hybrid electric, all-electric and hydrogen fuel-cell electric models, sold in the January-June period reached 70,142 units, up 30.4 percent from the same period in 2018, according to data from the Korea Automobile Manufacturers Association (KAMA) and foreign automakers.

In contrast, overall sales of passenger cars dipped 4.7 percent on-year to 735,646 units in the first half of the year, the data showed.

The portion of eco-friendly cars rose to 9.5 percent from 7 percent a year earlier.

In the first six months of the year, 52,895 environment-friendly vehicles from domestic automakers were sold, up 27.5 percent from a year ago.

But in terms of all registered cars, eco-friendly vehicles accounted for a meager 2.8 percent as of June, the data showed.