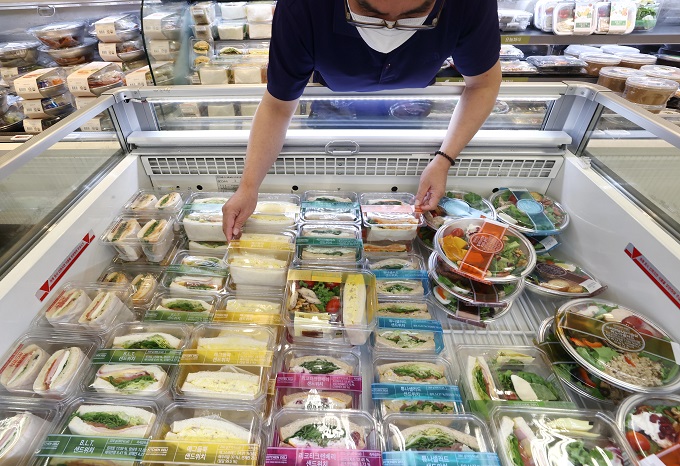 Sandwiches and salads are display at an outlet of E-Mart in Seoul on Aug. 3, 2022. (Yonhap)

E-Mart Inc., a discount store chain under Shinsegae Group, saw the sales of simple meals such as sandwiches, salads and gimbap (seaweed rice rolls with vegetables) jump by 25 percent in the January to July period of this year compared to a year ago.

In particular, sales of sandwiches and salads rose by 30 percent and 95 percent, respectively.

Sales of samgak gimbap (triangle-shaped gimbap) grew by 48 percent and those of microwaveable meals such as bibimbap (a traditional dish that mixes rice, vegetables, meat and hot pepper paste) and pasta rose by 30 percent.

The number of customers who purchased simple meals during the lunch hours from 11 a.m. to 1 p.m. increased by 20 percent, with sales of such meals during lunchtime rising by 30 percent.