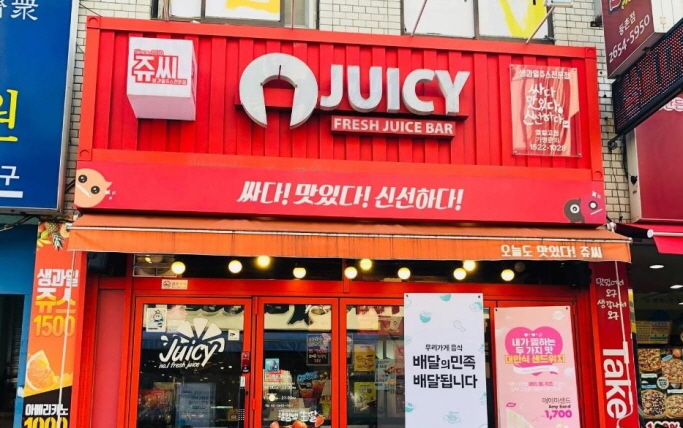 As the company focuses on “take-out” customers and stores typically have few seats, Juicy Co. were less popular on days when air pollution was severe. (image: Juicy Co.)

Companies are responding by increasing delivery services so that customers can purchase their food without having to leave home. Furthermore, direct management stores are selling masks or introducing air purifiers.

It was reported on Wednesday that sales at Juicy Co., a brand specializing in fruit juice, decreased by up to 20 percent from the previous year between late February and early March when air pollution was severe.

As the company focuses on “take-out” customers and stores typically have few seats, unlike like large coffee shops, they were less popular on days when air pollution was severe.

For this reason, the industry is either turning to delivery altogether or opting for a desperate measure to sell fine dust-related products together.

Of Juicy’s franchises, some 200 offer delivery services through the delivery apps “Baedal Minjok” or “Yogiyo.”

It is predicted that as the problem of fine dust gets worse, the center of gravity will shift to delivery. Juicy headquarters is persuading all store owners to make use of delivery services.

It is also developing drinks made from watermelon, which has a lot of citrulline and lycopene ingredients that are good for discharging waste.

Coffee franchise A Twosome Place has introduced air purifiers at three more direct-run stores in Seoul since last month. Officials reported that the company will install air purifiers at all company-owned stores that will open in the future.

Dunkin’ Donuts Korea has also been selling fine dust masks that typically retail for 8,000 won (US$7.00) for only 500 won on days when fine dust levels are “bad”, an initiative that was launched last month.