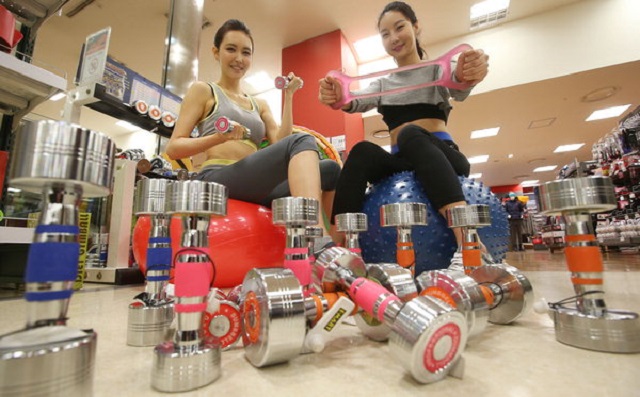 The hike in demand for muscle-strengthening equipment among women comes in addition to the increase in the number of people who exercise at home. (Yonhap)

SEOUL, July 10 (Korea Bizwire) — An increasing number of South Korea women are bulking up to stay healthy rather than striving to have a slim shape.

Gmarket, an online shopping mall run by eBay Korea, announced on Thursday that sales of muscle-building equipment purchased by female customers in the one-month period starting on June 6 rose by 32 percent from a year ago.

In particular, purchases of equipment which allow the user to do sit-ups and bench presses by female customers over this period jumped by 98 percent year on year.

The number of kettlebells – also popular for weight training – purchased by women over the same period also doubled from a year before.

Female purchases of barbells and dumbbells were also up 59 percent and 43 percent, respectively, compared to last year.

The number of ab wheels bought by female customers was also up by 22 percent on year, while demand for handgrips, chin-up bars, push-up bars, and squat machines rose by 45 percent, 40 percent, 36 percent, and 15 percent, respectively.

The hike in demand for muscle-strengthening equipment among women comes in addition to the increase in the number of people who exercise at home rather than at a gym due to the outbreak of coronavirus.

“In recent days, the perception is growing that it’s important to exercise to maintain a healthy body and see one’s own body positively regardless of weight,” Gmarket officials said.