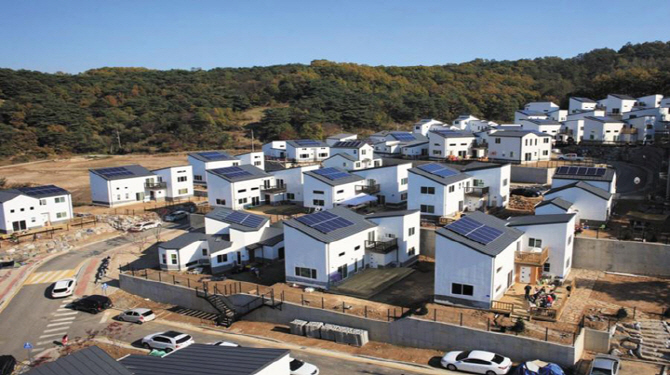 To create an energy trading village, the city plans to develop a platform for surplus power trading and sharing services for housing. (image: Korea Energy Agency)

SAMCHEOK, Aug. 23 (Korea Bizwire) — The city of Samcheok in Gangwon Province has announced plans to develop an energy trading village where residents will be able to buy and sell electricity among themselves.

The target village is located within Jeongsang-dong, where solar power facilities are installed at 94 out of 200 households.

To create an energy trading village, the city plans to develop a platform for surplus power trading and sharing services for housing.

To this end, the city will spend 5.8 billion won (US$4.79 million) to supply additional hydrogen fuel cell generators and energy storage systems for housing.

Public solar power facilities in the village will also be established.

The venture is expected to last for three years until the end of April 2022. This year, a pilot project involving 5 to 10 households will be carried out.