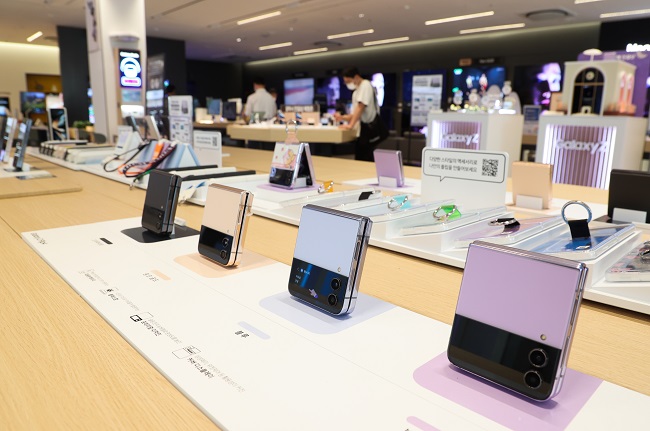 SEOUL, Sept. 29 (Korea Bizwire) — Samsung Electronics Co. and Apple Inc. are focusing on the promotion of smartphones via offline experiential booths as they begin to concentrate on the high-yield premium smartphone market.

Samsung has opened up Galaxy Studios at some 60 locations in the country, offering the public a chance to try out the Galaxy Z Fold 4, Galaxy Z Flip 4 and other new products.

Visitors can freely carry around the newest foldable phones, taking photos and trying out other features.

For those who wish to try them out at home, the company also started the To Go service which allows users to try out the phone for three days.

Apple has started the Today at Apple program at Apple Jamsil, its fourth and the newest retail store the country, in which participants take a walk around Seokchon Lake with the store employees as they use various Apple products to take photos and draw pictures.

At Apple’s Myeongdong and Jamsil stores, pick-up zones have also been set up where users can collect the products they ordered online on the same day.