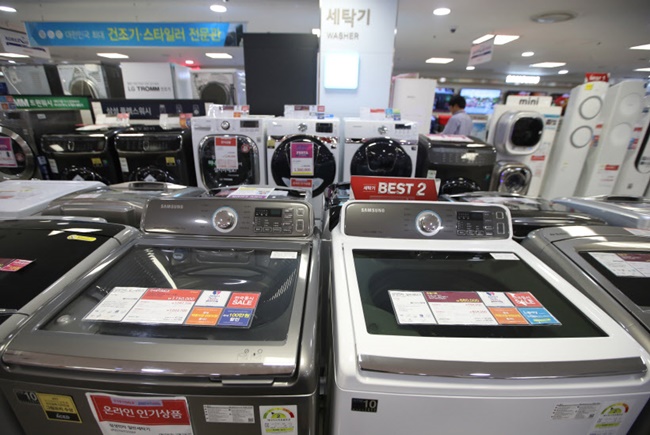 The two South Korean electronics giants are increasingly having to defend their position in the U.S. refrigerator market as Whirlpool steps up calls for the United States International Trade Commission (ITC) to target Samsung and LG with tariffs under the Trump administration’s ‘America first’ economic policy. (Image: Yonhap)

The two South Korean electronics giants are increasingly having to defend their position in the U.S. refrigerator market as Whirlpool steps up calls for the United States International Trade Commission (ITC) to target Samsung and LG with tariffs under the Trump administration’s ‘America first’ economic policy.

So far, the U.S. home appliance giant has got the green light from the ITC on its petition to eliminate competition from South Korean washing machine manufacturers as the commission voted unanimously earlier this month in a show of agreement that an overwhelming number of imports have caused ‘serious damages’ to U.S. companies.

Samsung also emphasized that the company’s products are ‘made by Americans, and sold to American consumers,’ while warning that import regulations could affect plans for a new plant in South Carolina.

“We believe that safeguard remedies should not discriminate in favor of one group of U.S.-based workers over another and should not negatively impact a fair appliance marketplace for consumers,” the company added.

LG also argued that Whirlpool’s claim of severe damages caused by South Korean refrigerators are not backed by evidence, citing the fact that the U.S. home appliance manufacturer posted an operating profit to sales ratio of 11.8 percent during the second quarter of this year in the North American region.

LG also argued that refrigerators produced at its Changwon plant should be exempt from the possible trade protection measure as stated in a previous decision by the ITC, while arguing that the safeguard could lead to a lack of consumer choice and price increases.

The ITC is set to take another vote early next month to decide on the level of safeguards and how they will be implemented.