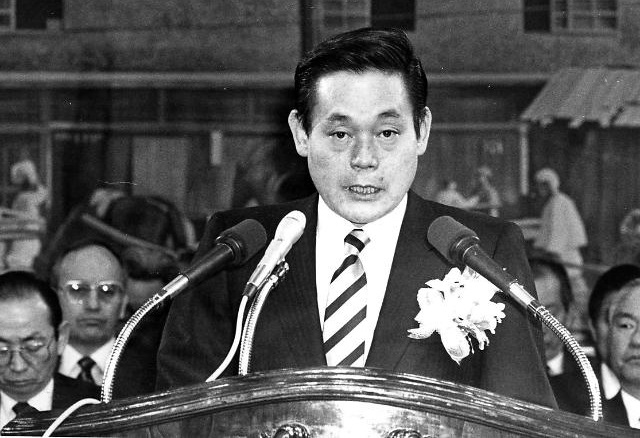 SEOUL, Oct. 25 (Korea Bizwire) — Lee Kun-hee, the architect of now South Korea’s top conglomerate, Samsung Group, had been making headlines in the country’s business, social and even political realms since taking over the helm of the business empire from his father for his offbeat approaches and business insights.

Lee inherited the Samsung crown in 1987 at the age of 45 when his father Lee Byung-chull, founder of the present day Samsung Group, died.

Under his leadership, the group has the world’s largest smartphome and memory chipmaker Samsung Electronics Co. and dozens of affiliates ranging from Samsung Life Insurance Co. to Samsung Heavy Industries Co.

But beyond the shiny badge of the “Samsung Empire,” as the conglomerate is often called, family feuds have played out in public and critics have made unceasing accusations that the empire runs on broken laws.

Born on Jan. 9, 1942, in the country’s southeast city of Daegu, Lee was the youngest son of Byung-chull, who had three sons and five daughters.

Lee wasn’t originally the intended successor. The eldest son Maeng-hee at one time ran the business as was expected in a deeply Confucian society.

But Maeng-hee, in his father’s eyes, did not have the required skills.

He and the other elder brother, Chang-hee, both fell out of grace following a criminal conviction over the smuggling of saccharine and a petition to the presidential office — believed to have been made by the two — accusing their father of dodging taxes and illegally taking money out of the country.

After studying business at Japan’s Waseda University and George Washington University in the United States, Kun-hee started his business management training at Tongyang Broadcast Co., a media firm affiliate of Samsung at the time. 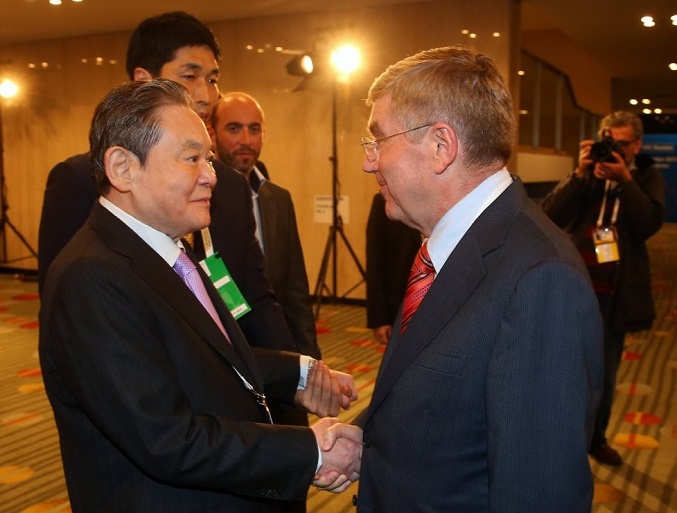 In this photo provided by Samsung Group on Oct. 25, 2020, the conglomerate’s Chairman Lee Kun-hee (L) attends the 125th general session of the International Olympic Committee (IOC) held at a hotel in Buenos Aires in 2013.

His full-fledged management participation began in 1978, when he was promoted to vice president of Samsung Group, the first step to being groomed for the Samsung throne.

In 1993, Lee Kun-hee announced his first trademark business philosophy, the “New Management Initiative,” which is embraced by Samsung like a doctrine to date.

The most famous line from that philosophy, which took shape through nearly three months of meetings with CEOs convened in Europe and Japan, is, “Change everything but your wife and children.”

Before the announcement, Lee had been shocked by a videotape of workers manually refitting the defective cover of a laundry machine by cutting out the edges with a knife.

Two years later, he burned 150,000 wireless phones for all to see to send the message that he won’t tolerate defective products.

Lee streamlined the group structure to selectively focus on key sectors. He split off Shinsegae Co., a retail segment, in 1991, and Cheiljedang, which is now called CJ Group, in 1993.

In 2006, he announced the “Mach Management Initiative,” comparing Samsung to an airplane that has to change not only its engine but also all materials and systems in order to fly faster than the speed of sound.

Samsung likewise had to change its very inner core and structure to put itself on the world stage, Lee said.

The strategies paid off. Samsung Electronics outpaced Japan’s Sony Corp. in the TV industry in 2006 and Apple Inc. in the smartphone market in 2012.

But successes also came with flops.

He jumped into the automobile industry in 1995 by launching Samsung Motors Co., but the car business struggled, and turned into Renault Samsung Motor Co. after the French carmaker purchased an 80.1 percent share in the firm.

Another crisis came in 2007, when a former legal adviser for Samsung exposed the fact that the conglomerate runs gargantuan slush funds and uses them to bribe influential people, including politicians, prosecutors and government officials, to make sure they look the other way from Samsung’s illegal business practices — including the transfer of wealth to family members.

Kun-hee gave up all management in April 2008 under mounting public pressure over the controversy. In August 2009, he was convicted of tax evasion and of hiding his assets in his aides’ accounts. Prosecutors said they did not find evidence of slush funds.

The tycoon, however, was pardoned by then President Lee Myung-bak four months later. The president said the country needed the Samsung leader to help win the bid to host the 2018 Winter Olympics.

Kun-hee had been a member of the International Olympic Committee since 1996. 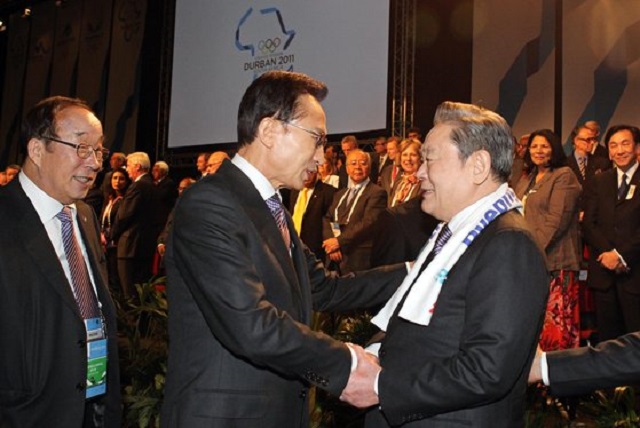 He was reinstated as the chairman of Samsung Electronics in March 2010 at the request of the group’s CEOs, who said they desperately needed his entrepreneurial experience and skills to survive the crisis facing the group.

Samsung’s Galaxy smartphone lineup is also cited as one of his most successful projects.

Lee married Hong Ra-hee, whose father twice served as a Cabinet minister in 1966. They had a son and three daughters. The youngest daughter committed suicide in 2005.

The senior Lee’s crown was handed over to his only son and eldest child Jae-yong, who, like his father, was groomed for the role.

Jae-yong has been making efforts to pave the way for his managerial inheritance, including kicking off the new Samsung C&T Corp. as the de facto holding firm of the conglomerate.

He is currently vice chairman of Samsung but has been considered the de facto leader of the tech empire since his father collapsed from a heart attack in May 2014.