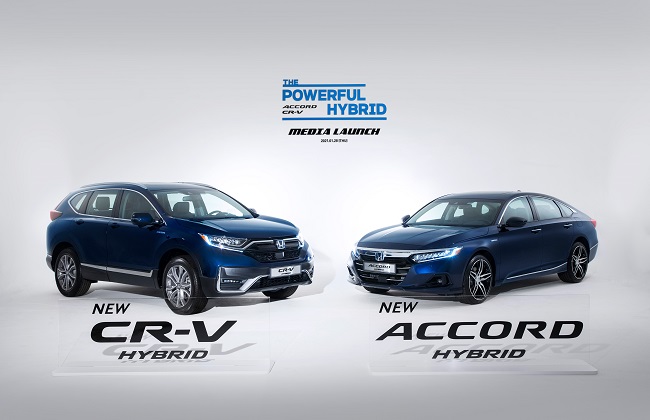 This file photo provided by Honda Korea shows the new CR-V hybrid and the upgraded Accord hybrid models.

Honda Korea has launched the new all-wheel CR-V hybrid SUV and the upgraded Accord hybrid sedan to regain a share in the Korean market, where its sales plunged 65 percent to 3,056 vehicles last year from 8,760 a year earlier.

“We are targeting to sell 3,000 hybrid models this year and raise the percentage of hybrid models in total sales to 80 percent in 2024 (from last year’s 30 percent),” Honda Korea President and Chief Executive Lee Ji-hong said in an online press conference.

Honda aims to raise the proportion to 65 percent this year based on hybrid vehicles, he said.

In recent years, Japanese carmakers have struggled with declining sales due to a trade dispute between Seoul and Tokyo. Their sales show no signs of rebound amid the COVID-19 pandemic.

Japanese brands — Toyota Motor Corp. and its luxury brand Lexus, Honda Motor Co. and Nissan Motor Co. and its premium brand Infiniti — sold a total of 20,564 units in Korea last year, down 44 percent from 36,661 a year ago.

Nissan and its luxury brand Infiniti withdrew their operations from Korea in December as the local business environment continued to worsen amid the pandemic.

In 2019, Japan tightened regulations on exports to South Korea of three high-tech materials critical for the production of semiconductors and displays. It also removed South Korea from its list of countries given preferential treatment in trade procedures.