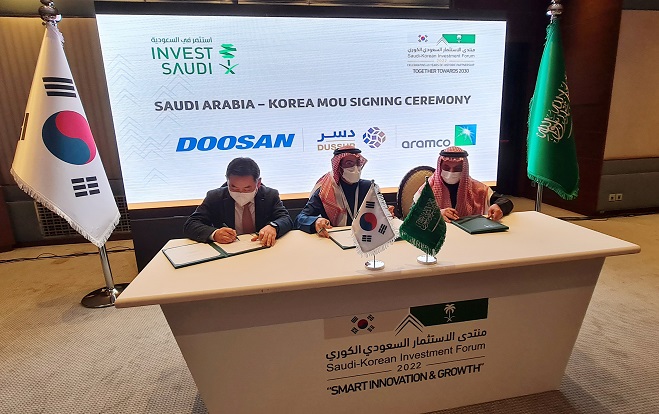 This photo, provided by Doosan Heavy Industries & Construction on Jan. 19, 2022, shows a signing ceremony on the construction of a casting and forging factory in Saudi Arabia.

The deal on Tuesday came during a visit to Saudi Arabia by South Korean President Moon Jae-in as part of his tour in the Middle East.

Doosan Heavy said it is scheduled to sign an engineering, procurement and construction contract with TWAIG Casting & Forging to build the plant, without elaborating on a specific time frame.

The plant, which is set to be completed in the first quarter of 2025, will have an annual production capacity of 60,000 tons of casting and forging materials, according to Doosan.

“This project has a significant meaning in that it is the first time that Doosan makes inroads into a foreign market with its technology in casting and forging materials,” Doosan Heavy Chairman Park Gee-won was quoted as saying by his company.

Doosan Heavy declined to give any details on its stake in the joint venture.