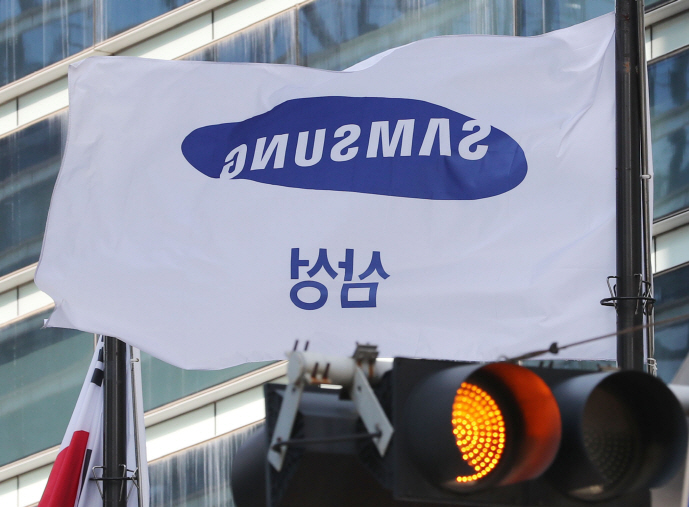 A flag in front of Samsung Electronics Co.’s Seoul headquarters flutters in the wind on Aug. 20, 2019. (Yonhap)

SEOUL, Aug. 29 (Korea Bizwire) — Samsung Group is facing yet another headwind at home as South Korea’s top court ordered a review of a suspended sentence for its de facto leader in a bribery case Thursday, adding to the woes that the nation’s largest conglomerate is dealing with.

Lee Jae-yong, vice chairman of Samsung Electronics Co., was put behind bars in 2017 after receiving a five-year jail term for his involvement in a corruption scandal that led to the ouster of former President Park Geun-hye.

After serving about one year, the 51-year-old walked out of the prison in February 2018 after an appeals court halved his original sentence, which was suspended for four years.

Samsung had been accused of paying bribes to Park’s secret confidante Choi Soon-il in return for government support for a merger of two units of the conglomerate.

As the Supreme Court ordered the appeals court to reconsider his suspended jail term, the founding family scion could go back to prison depending on the final verdict, creating uncertainties at the sprawling business empire with about 60 affiliates.

“Samsung’s worst nightmare has been realized as the Supreme Court ruling is further amplifying uncertainties at the leadership when the company is already going through hard times,” a high-ranking Samsung official said, asking not to be named.

“Nearly three years after the corruption scandal broke out, it seems like Samsung is back to square one.”

Samsung apologized for “causing concerns to people” with the case, vowing to improve transparency at the company.

“Samsung has faced difficulties due to uncertainties at home and abroad over the past several years, being unable to focus on preparing future growth drivers,” Samsung said in an emailed statement.

“Samsung will be faithful to the company’s original role so as not to repeat past wrongdoings.”

Though the son of hospitalized Samsung Group Chairman Lee Kun-hee controls only a fraction of shares at arguably the most important company in Corporate Korea, the owner family has played a critical role in shaping the corporate vision and approves major strategic decisions.

Lee, who had largely kept a low profile, has increased public appearances and made well-publicized factory visits this month after Japan tightened its export regulations on key materials for chips and displays, sending a signal that he was ready to take the driver’s seat at a critical time.

The top court’s ruling couldn’t have come at a worse time for Samsung Electronics, already grappling with business headwinds at home and abroad.

The world’s largest memory chip and smartphone maker saw its operating profit in the first half of this year more than halved due to softening chip prices and weak demand for smartphone and displays in the wake of a prolonged trade war between the United States and China.

The semiconductor business, which accounts for over 70 percent of its total revenue, has been on a downward spiral, following a super cycle in the previous two years. 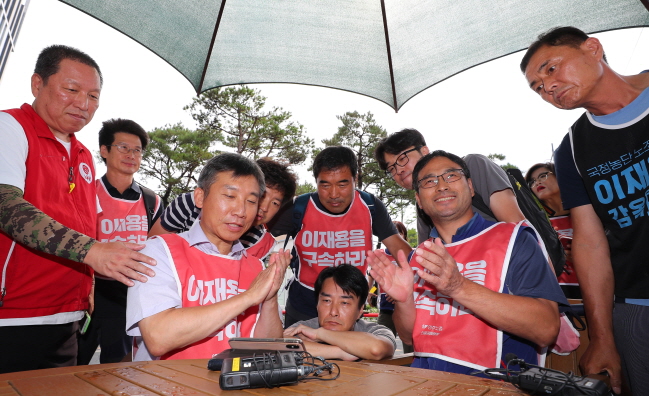 Adding to the woes, Tokyo tightened export regulations on three key materials for chips and displays in early July, prompting Lee to fly to Japan to secure emergency stockpiles and hold several meetings with top executives.

As Japan adopted stringent export controls on over 1,100 strategic items after removing South Korea from a list of trusted buyers Wednesday, Samsung is preparing various scenarios to minimize fallout from the new export regulations.

Besides the retrial of the corruption case involving the ex-president, Samsung’s leadership is under growing pressure from the expanding prosecution investigation into Samsung BioLogics Co., a bio-health unit accused of accounting fraud.

Prosecutors have been looking into suspicions that the accounting fraud may have served to benefit a 2015 merger between two Samsung units and thereby enhance Samsung heir’s control at the group.

Eight executives at Samsung Electronics and Samsung BioLogics have been arrested for their alleged roles in the case.

“As the top court acknowledged Lee provided bribes to Choi to facilitate his succession at the group, the prosecution’s probe into Samsung BioLogics is also expected to gain steam,” an industry official said, asking not to be named.

The South Korean business community expressed concerns that the court decision could further aggravate uncertainties in Samsung, which plays a key role in Asia’s fourth-largest economy.

“The Korean economy is facing challenges at home and abroad due to a trade war between the United States and China, Japan’s export curbs, and companies need more support to make investment and create jobs,” the Korea Enterprises Federation, a business lobbying group, said in a statement.

“For the country to reduce reliance on imports of key parts and materials, Samsung should play a leading role in developing future growth drivers, including non-memory and bio industries.”

Samsung Electronics’ overseas revenue accounted for about 20 percent of South Korea’s total exports in the first half of this year.

Together with its Samsung affiliates, the conglomerate’s contribution to the national economy was considered greater.