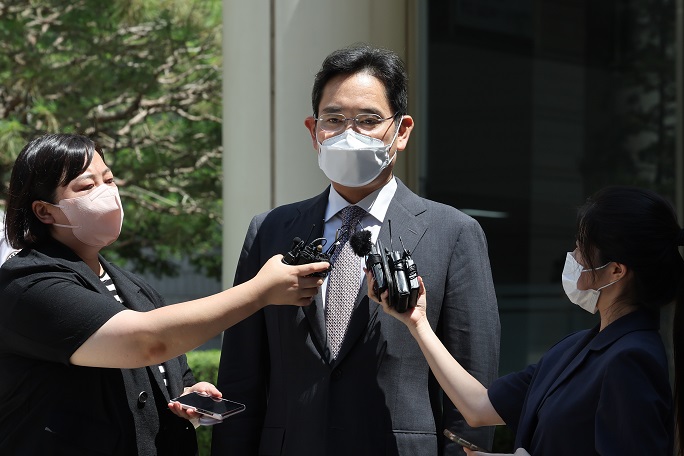 Samsung Electronics Vice Chairman Lee Jae-yong speaks to reporters in front of the Seoul Central District Court on Aug. 12, 2022, following the government’s announcement of a presidential pardon for him. (Yonhap)

The government announced the pardons to be effective from Liberation Day on Monday.

Former President Lee Myung-bak had initially been widely expected to benefit from the pardons but was not included in the list. Also excluded was former South Gyeongsang Province Gov. Kim Kyoung-soo, one of the closest associates of former President Moon Jae-in.

The most prominent beneficiary is Samsung Electronics Vice Chairman Lee.

“I will work hard for the national economy,” Lee told reporters in front of the Seoul Central District Court upon the pardon announcement. Lee is currently standing trial in a separate accounting fraud case involving the 2015 merger of Samsung affiliates.

He was released on parole in August last year while serving a 2 1/2-year prison term in a bribery case involving former President Park Geun-hye. His prison term officially ended July 29, but he still needs a pardon to have all his rights reinstated.

“Key business people were included in the pardons in consideration of their roles in leading national growth through technology investment and job creation, given that the country badly needs to overcome an economic crisis,” a government official said.

A widely expected pardon for the 81-year-old former President Lee was ruled out at the last minute as Yoon’s approval rating has fallen to unusually low levels in recent weeks and pardoning the unpopular former president could worsen his standing.

Lee has been out of prison since June on a three-month suspension of his prison term over health issues.

Most of the others in the pardon list were those convicted of petty criminal offences, small-size business owners and inmates in needy situations. 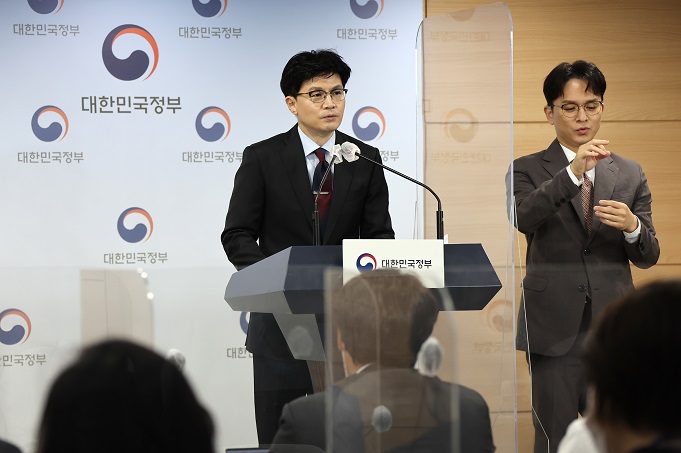 Justice Minister Han Dong-hoon (L) announces the beneficiaries of a presidential amnesty, including Samsung Electronics Co. Vice Chairman Lee Jae-yong, at the government complex in Seoul on Aug. 12, 2022. The amnesty was granted on the occasion of Aug. 15 Liberation Day marking Korea’s independence from the Japanese colonial rule (1910-45). (Yonhap)

Speaking at the Cabinet meeting, President Yoon expressed hope that his special Liberation Day pardons would help stabilize people’s livelihoods and pull the nation out of its economic crisis.

In South Korea, presidents usually grant special pardons in commemoration of major national holidays, with leaders of top conglomerates, known as chaebol, often becoming beneficiaries on the grounds that their return to management will help boost the domestic economy.

“Why were court trials held if they were going to be released anyway?” said party spokesperson Lee Dong-young.

“Judicial justice collapsed before money. This is the naked face of Yoon Suk-yeol’s rule of law that only favors the powerful.”

The main opposition Democratic Party said politicians should have been included.

“For social unity, it is customary to include politicians in the pardons. It is regrettable that only politicians were excluded,” Democratic Party interim leader Woo Sang-ho said.