He was put behind bars again less than three years after he was allowed to walk free.

“He actively and readily offered bribes to Park upon her demand for them, and engaged in improper activities in soliciting, although implicitly, Park’s support in the transfer of managerial power (at Samsung),” the court said in the verdict.

Park was later impeached and ousted from the presidency for corruption and abuse of power.

Last week, the top court upheld a 20-year prison term for Park on bribery and power abuse charges. Choi was sentenced to 18 years in prison on charges including abuse of power, coercion and bribery in June.

The appeals court said Samsung’s compliance committee is not seen as effective enough to be considered one of the sentencing factors favorable to Lee.

The conglomerate launched the committee in February to monitor the company’s compliance with laws and ethics, after the same court ordered Lee in October 2019 to devise measures for preventing ethical lapses at Samsung.

The committee seemed to have limited and somewhat vague authority to clean up potential corporate wrongdoing, the court said.

The company had pinned high hopes on the committee working to the benefit of the embattled Lee in his legal battle and possibly getting him a suspended sentence. 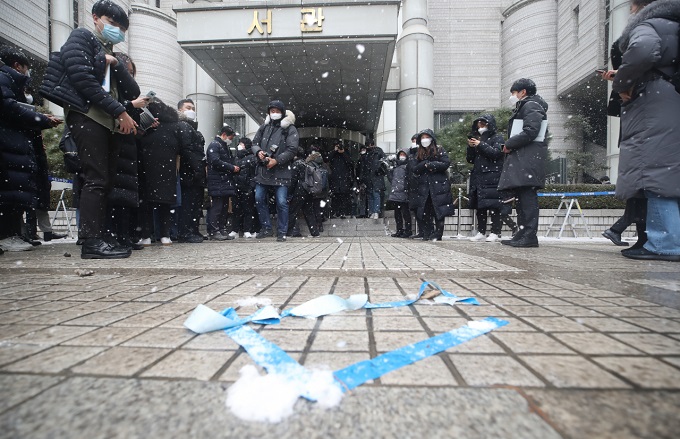 On the prison term of less than three years, which was far lower than the nine years sought by prosecutors, the court said it took into consideration Lee’s situation where he might have found it very hard to reject demands for bribes from the president.

Upon hearing the verdict, Lee stared forward blankly for a while. When the judges left the courtroom, he flopped into a chair and talked with his lawyers.

He was taken into custody at court, less than three years after he was released on a suspended sentence.

In 2017, he was sentenced to five years in prison for providing a total of 8.9 billion won in support for Choi’s daughter’s equestrian training and a donation to a sports foundation run by Choi’s family.

But he was freed the following year after an appeals court sentenced him to a suspended prison term of 2 1/2 years, based on the revised amount of bribes at 3.6 billion won.

In August 2019, the top court ruled Lee offered 8.6 billion won in total in bribes and remanded the case to the appeals court for retrial.

The verdict on Monday dashed hopes held by his supporters and other corporate leaders who have asked the court for leniency toward the Samsung scion, citing his role in helping overcome the economic difficulties brought by the coronavirus pandemic.

Calling the ruling unfair, some of his supporters protested against the ruling at the courtroom in tears.

“The nature of the case is the former president’s abuse of power, which infringed the business’ freedom and property rights,” said Lee In-jae, one of Lee’s lawyers. “Given that, the ruling is very regrettable.”

It was, however, widely welcomed by anti-corruption activists who have demanded the judiciary show a strong willingness to tackle the cozy relations between the industry and political elite, often blamed for the country’s poor corporate governance.