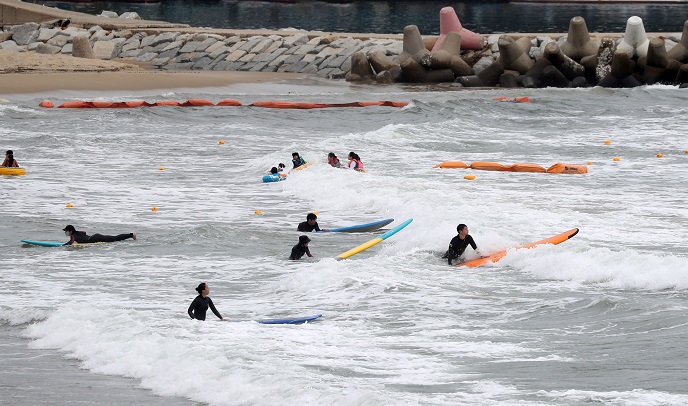 SEJONG, July 15 (Korea Bizwire) — South Korea said Wednesday it has adopted an alert system on the country’s 50 major beaches that will ban the entry of additional visitors in crowded areas to stem the spread of the new coronavirus.

Under the measure, authorities will issue the “red” alert when the number of visitors at beaches exceeds the level in which they can keep safe distances, according to the Ministry of Oceans and Fisheries.

Rental services for beach equipments will be suspended under the alert as well.

South Korea will also have the option of issuing a lower “yellow” alert, in which authorities will induce people to visit other nearby beaches, and will request vacationers to follow the country’s social distancing measures.

Starting July 25, vacationers will also be banned from eating or drinking at beaches during night hours. Violators can be slapped with fines of up to 3 million won (US$2,497) under the country’s disease control law, according to the ministry.

With a rising number of South Koreans spending their summer vacations at home as international flights are mostly grounded, around 200 beaches across the country were opened to visitors as of this week.

South Korea, which has never adopted a nationwide lockdown to cope with the COVID-19 pandemic and instead opted for social distancing guidelines, normalized most public facilities in early May as the virus curve flattened.

It nevertheless recently suffered an uptick in the number of new cases in the Seoul metropolitan area and the southwestern part of the country, where health authorities decided to raise their guards again.