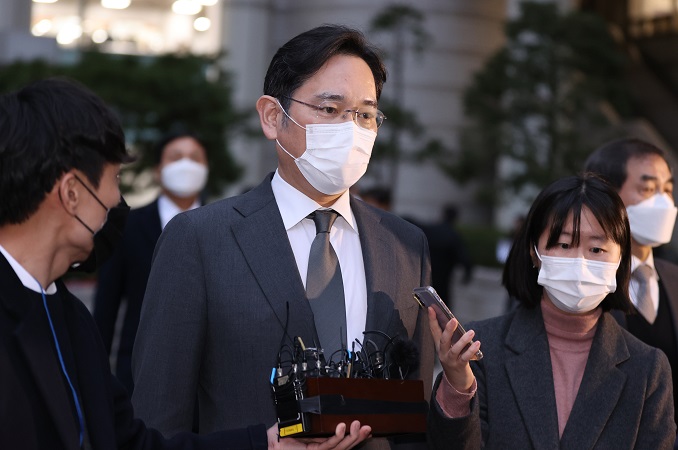 The vice chairman of Samsung Electronics Co. has been serving time since he was sentenced to 2 1/2 years in prison by the Seoul High Court on Jan. 18 in a retrial of a bribery case involving former President Park Geun-hye.

He was convicted of bribing Park and her longtime friend to win government support for a smooth father-to-son transfer of managerial power at the conglomerate.

Justice Minister Park Beom-kye announced that Lee will be among 810 inmates to be released at 10 a.m. Friday in celebration of the Aug. 15 Liberation Day.

The South Korean government has used the national holiday to grant paroles or special presidential pardons for national unity.

The ministry considered “the country’s economic situation and the conditions of the global economy amid the prolonged COVID-19 pandemic” as factors behind the decision, Park said in a briefing.

He also added that the ministry considered other factors including “social sentiment, and (the prisoner’s) behavior and attitude.”

Still, Lee will not be able to immediately return to Samsung because the Act on the Aggravated Punishment of Specific Economic Crimes bans those convicted of embezzlement or breach of trust involving amounts over 500 million won (US$436,300) from working for companies related to their crimes, or any institution that receives government subsidies.

The ban lasts five years from the day an offender completes his or her jail term.

The minister said no decision has been made on the restriction.

The decision was made after an hourslong meeting by the ministry’s parole committee to review inmates, including Lee, who have completed the requirements for parole eligibility after serving 60 percent of their prison terms. 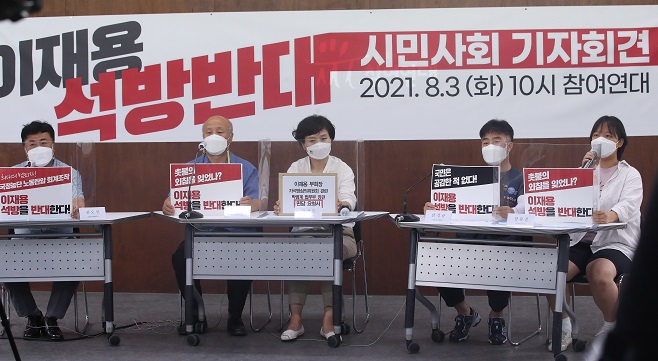 Representatives of civic groups opposed to the possible parole of Lee Jae-yong, the jailed de facto leader of Samsung Group, speak during a news conference held in central Seoul on Aug. 3, 2021. (Yonhap)

The possibility of parole for Lee has been hotly debated recently.

Earlier this month, a large number of civic groups issued a joint statement, opposing Lee’s parole and saying that such a decision would run counter to the anti-corruption drive of the Moon Jae-in government.

They also claimed that Lee’s parole could affect the course of separate ongoing trials over the controversial merger of two Samsung affiliates and the vice chairman’s allegedly illegal use of propofol, an anesthesia-inducing medication.

But an opinion survey conducted in July showed that a vast majority — more than 70 percent — of 1,003 respondents said they were in favor of parole of the jailed de facto leader of Samsung Group.

Samsung Group and the Korea Chamber of Commerce and Industry (KCCI) have demanded that Lee be released on parole or granted a presidential pardon to help him focus on managing the country’s biggest conglomerate.

“The decision reflects the people’s demand for economic recovery and call for Samsung to play a role in leading the recovery,” the Federation of Korean Industries in a statement, asking the group to more actively “make investments and create jobs.”

The KCCI also welcomed the decision that, it said, will allow Lee to come back to work at a time when “fast decisions” have become ever more crucial in running a business.

But civic groups, including the progressive People’s Solidarity for Participatory Democracy (PSPD), condemned the parole and called it “preferential treatment toward a chaebol leader, and being tantamount to the death penalty to judicial justice.”

The PSPD also called the decision “shameful” and said that it set a bad precedent for other chaebol leaders.