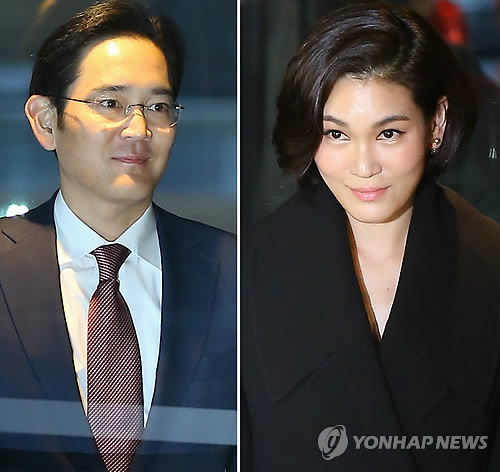 Lee Jay-yong, the only son of the patriarch of South Korea’s top conglomerate, appeared before a heavy gathering of press as he entered through the front entrance of Hotel Shilla, run by his elder sister Boo-jin.

The 47-year-old scion, who has been practically in charge of the group with over 70 subsidiaries worldwide since his father’s hospitalization, didn’t offer any comments as he walked through the lobby.

More than a hundred reporters and camera crews crowded the scene trying to cover the event headed by Lee’s children. It was their first public appearance in months after their father became ill in May last year. The younger Lees have stayed very low key since then.

Seo-hyun, Lee’s youngest daughter, entered the hotel before her brother, also without answering reporters’ questions. The eldest sister Boo-jin did not appear before the press as she was working in her office located inside the hotel.

The banquet is held at the beginning of every new year, presided over by chairman Lee Kun-hee, 73, and attended by new executives and their spouses. It is seen as marking a new start for Samsung, during which the chairman lays out the big picture to the leaders of major affiliates in relation to business plans for the year.

This year, some 500 executives and invitees are believed to have attended, according to sources familiar with the matter, including Kwon Oh-hyun and Yoon Boo-keun, the two top C-suite members responsible for Samsung Electronics, the group’s crown jewel.

Lee Jay-yong, the vice president of Samsung Electronics, apparently stressed “innovation and challenge” in his toast, asking for all-out efforts to discover and develop fresh growth engines such as Internet-of-Things (IoT) and business-to-business (B2B), which could bring new breakthroughs for the company facing its toughest year amid a drop in profit.

Samsung Electronics is expected to have marked its worst performance in three years for 2014.Its third-quarter operating profit more than halved from a year earlier, hit by a slump in sales of its flagship Galaxy smartphone.