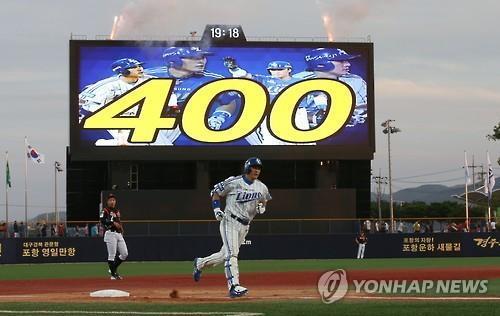 Lee Seung-yuop of the Samsung Lions rounds the bases after connecting for his 400th career home run in the Korea Baseball Organization on June 3, 2015, in Pohang, North Gyeongsang Province. (image: Yonhap)

Lee, the 38-year-old star for the Samsung Lions, took Koo Seung-min of the Lotte Giants over the right field for the historic solo homer with two outs in the bottom third at Pohang Baseball Stadium in Pohang, North Gyeongsang Province, some 370 kilometers southeast of Seoul.

Pohang is the second home of the Lions, who are based in Daegu, a metropolitan city lying west of Pohang.

Lee watched the first pitch curve for a strike and then drilled the next pitch, a fastball clocked at 140 kilometers per hour (87 miles per hour), over the right field wall. It was measured at 120 meters (394 feet).

Fireworks erupted in celebration of the milestone and the number “400″ flashed on the scoreboard as Lee rounded the bases. After the end of the inning, the Lions’ manager Ryu Joong-il and team captain Park Sok-min, along with the Giants’ captain Choi Joon-seok, presented Lee with flowers.

Thanks to Lee’s heroics, the Lions defeated the Giants 8-1 for their fifth consecutive win. Lee went 1-for-3 with an RBI and two runs scored.

“As soon as I made contact, I felt I’d done the job,” he said. “I was confident in my first at-bat, though I ended up drawing a walk. I’d never faced the pitcher (Koo) before, and I was just trying to sit on his fastball.”

Lee also thanked the Giants for their show of respect for the milestone.

“I am really, really thankful that their manager (Lee Jong-woon) and captain came out to congratulate me,” he said. “I’d like to thank the Giants organization.”

This was Lee’s 10th home run of the season. He has now reached double figures in the long ball department for 11 consecutive KBO seasons.

Lee has led the KBO in homers in five different seasons, more than anyone in the league history.

Lee is already the KBO’s career leader in home runs and is rewriting record books with every homer he hits.

Only six other players have hit at least 300 homers and they are all retired. Lee Ho-jun of the NC Dinos is second behind Lee on the active list with 299.

Lee Seung-yuop and Lee Ho-joon are the only two active players among the top 10 on the KBO career home run list.