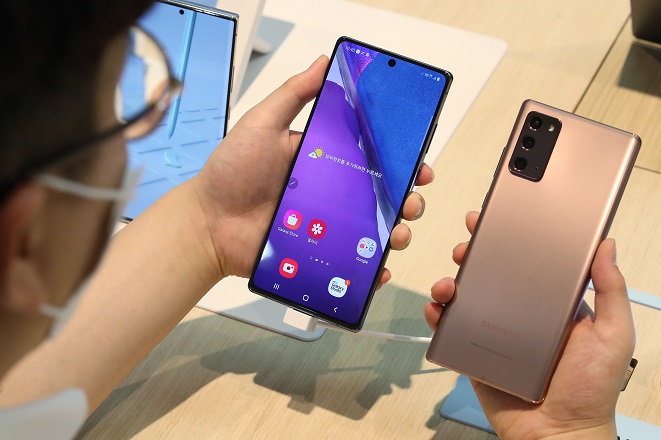 This photo taken on Aug. 7, 2020, shows a consumer looking at Samsung Electronics Co.’s Galaxy Note 20 smartphones at a Samsung store in Seoul. (Yonhap)

SEOUL, Aug. 11 (Korea Bizwire) — Samsung Electronics Co. remained the second-largest smartphone vendor in Canada in the second quarter of the year, but its market share gap with Apple Inc. has widened, a report showed Tuesday.

Samsung took a 34 percent market share in the April-June period in terms of smartphone shipments, according to industry tracker Counterpoint Research, down from 37 percent a year ago.

Apple solidified its top status in Canada, accounting for a 52 percent share in the second quarter of the year, up from 44 percent a year earlier.

“Later in the quarter, the premium Galaxy S-series picked up steam from heavy promotional discounts.”

Counterpoint Research said Apple captured seven spots in the top 10 best-selling handsets in the second quarter, with the iPhone 11 being the top seller.

Samsung captured the remaining three spots in the top 10 list, with the Galaxy S10 series faring better than the latest Galaxy S20 series.

Samsung’s South Korean compatriot LG Electronics Inc. came in third with a 4 percent market share, down from a 6 percent share a year ago.

Counterpoint Research said smartphone sales in Canada declined 36 percent year-on-year in the second quarter of the year due to the COVID-19 pandemic.

“The majority of carrier stores remained shut through the first half of the quarter, especially those in shopping malls,” said Hanish Bhatia, a senior analyst at Counterpoint Research.

“Customers refrained from making new purchases and preferred to isolate at home.”