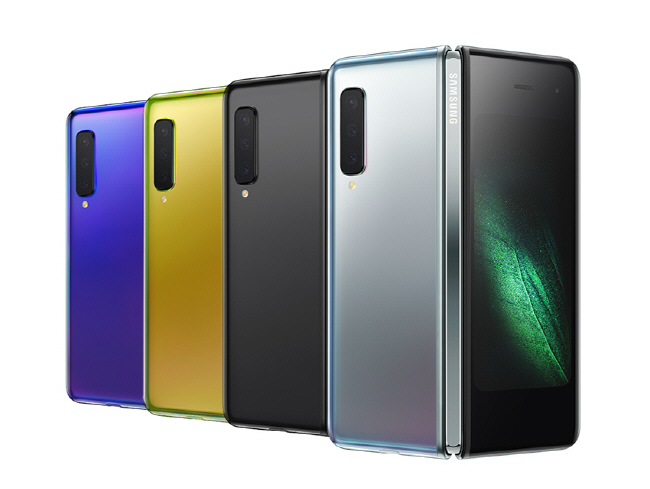 SEOUL, Apr. 15 (Korea Bizwire) — Samsung Electronics Co. started preorders for the Galaxy Fold in the United States but closed it due to limited supplies and high demand for the new device, the South Korean electronics maker said Monday.

Samsung said it started accepting reservations for advance orders of its first foldable device for American consumers Friday but stopped a day later when the list filled up.

“The Galaxy Fold reservation list is full,” Samsung said on its U.S. website, without elaborating on how many phones were available. “Due to high demand, we are unable to accept any more preorder reservations. We will alert you when Galaxy Fold is available.”

Samsung’s Galaxy Fold goes on sale in the U.S. at the hefty price tag of US$1,980 on April 26. The phone will be available through U.S. carriers, such as AT&T and T-Mobile, as well as electronics stores Best Buy and Samsung Store.

The company will also open preorder reservations for the foldable phone in Europe on April 26, with an official release date set for May 3.

Galaxy Fold will be launched in a 5G-only model in South Korea in mid-May, and it is expected to cost around 2.4 million won ($2,100), according to industry officials.

Samsung said earlier it aims to sell over 1 million foldable devices in the global market this year.

The tech giant has expressed hope that the foldable device and its new smartphone strategy will boost sales in the high-end segment in the face of toughening global competition and the saturated smartphone demand.

Samsung, the world’s largest smartphone maker by market share, changed its strategy this year to launch a wider range of flagship phones to cater to various consumer needs.

Unlike the previous lineup composed of two variants, Samsung’s latest flagship, the Galaxy S10 series, consists of three phones — S10, S10 Plus and S10e — which performed better than its predecessors upon their debut in the U.S.

The new S10 series sold 16 percent more in the first week of its U.S. sales compared with last year’s sales of the S9 series, according to Counterpoint, which tracks new weekly smartphone models in the U.S. market.

Counterpoint Research predicted the S10 series to be on track to ship 40 million units in 2019 as it faces less competition than last year.