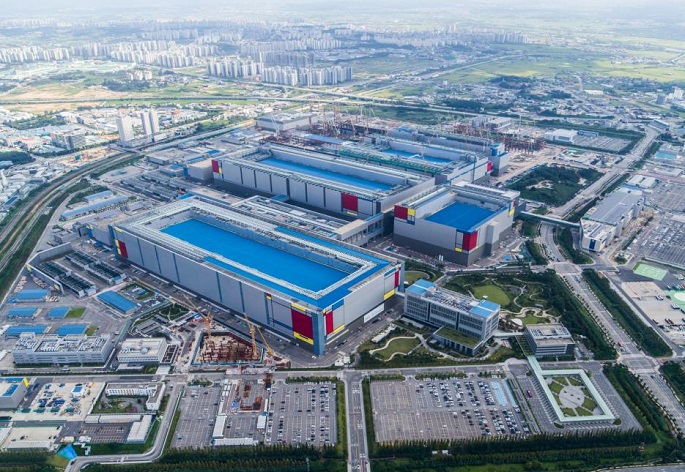 Samsung’s Pyeongtaek campus in Pyeongtaek, 70 kilometers south of Seoul, is seen in this photo provided by Samsung Electronics Co. on Sept. 7, 2022.

The new production line (P3) in Pyeongtaek, the largest chip manufacturing facility ever built to date by Samsung, has started production of state-of-the art NAND flash since July.

“The Pyeongtaek campus is fast emerging as Samsung’s key manufacturing hub for cutting-edge semiconductors ranging from the world’s smallest 14-nanometer (nm) DRAM and leading-edge V-NAND to sub-5nm logic solutions,” Kyung Kye-hyun, CEO and president of Samsung’s device solutions division, said at a rare press event at the campus, some 70 kilometers south of Seoul.

Samsung, the world’s largest memory chip maker, said it has begun foundation work for yet another manufacturing line, P4, at its Pyeongtaek’s mega 2.9 million-square-meter campus.

In May, U.S. President Joe Biden toured the Pyeongtaek campus, where he emphasized the importance of semiconductors and close collaboration in the field between South Korea and the U.S.

It is currently building a US$17 billion plant in Austin, Texas. 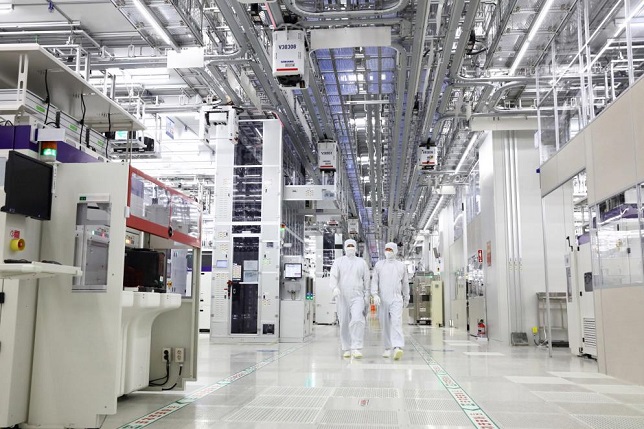 At the press briefing, Kyung struck a gloomy note, saying the chip industry has entered a down cycle and is facing various challenges, as the global economy has slowed and businesses tightened their spending.

“I don’t see good momentum in the second half and into the next year … but we will try to turn this crisis into a good opportunity,” he said.

In order to achieve that, investment regardless of the economic situation is crucial, he said.

“Less investment in a down cycle could lead to bad results in good times,” he said, adding “consistent investment is the right way to go.”

As a way to boost its chip competitiveness, Samsung has been carefully considering M&A options, Kyung said.

“I can’t give you details about potential targets, but we have set our priority and been reviewing our options,” he said.