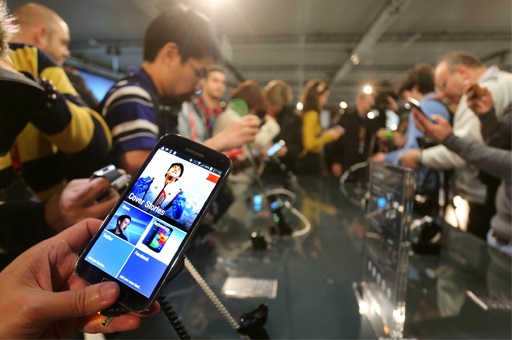 SEOUL, Korea, Mar 27 (Korea Bizwire) – Amid the suspension of business of three major mobile communications carriers in Korea due to breaches in telecom regulation, Samsung Electronics is expected to begin rolling out its strategic smartphone “Galaxy S5” from March 27 in Korea, about a half month earlier than overseas markets.

According to a report from the Korea Economic Daily, Samsung began taking advance orders at its two electronics retail stores in Seoul from March 24. Those who enlisted their names on the pre-order roll can grab the Galaxy S5 as earlier as 27th and can open an account with the brand-new Samsung smartphone at SK Telecom.

A Samsung official said, “Originally, the Galaxy S5 was supposed to be rolled out on April 11 globally. However, the date can be changed by the local market situation and Korea is not an exception.”

Such an earlier roll-out of the Galaxy S5 in Korea seems to avoid the business suspension period of the mobile carriers. Due to the excessive subsidy competition, they were sanctioned to hold their business with customers by the Korea Communications Commission for 30 to 45 days. KT and LG U+ are now suspended for their business and SK Telecom will stop singing on new subscribers from April 5.

As the scheduled roll-out date of the Galax S5 falls on in the middle of their business suspension period, Samsung cannot expect to secure any popularity in the early stage. So, the company moved up the date to sell the new smartphone to subscribers of SK Telecom, the largest mobile carrier in Korea which boasts 27 million subscribers.

Also, worries on the financial performance deterioration of Samsung Electronics seemed to incite the earlier roll-out. It is expected for Samsung to show worsening performance due to the stagnant global smartphone market.

Some analysts foresee that Samsung’s operating profit in the first quarter will remain at the 8 trillion won level, a 10-percent decrease from a year ago. There are also weak outlooks that its performance will be worsened more in the latter half of this year due to the low demand on the highly priced smartphones like Galaxy S and Galaxy Note series.

An electronics industry analyst said, “In addition to the suspension of business among mobile carriers and worries on low performance, the controversies over the lack of innovation in Galaxy S5 make Samsung feel the pressure. The earlier launch can be understood as Samsung’s position to break through the crisis in the domestic market.”

Not Splendid But Practical, Low Priced

When the Galaxy S5 was first unpacked at the World Mobile Congress held at Barcelona last month, there were no splendid epithets such as “the fastest,” “the largest” or “the world first” unlike its predecessors.

Instead, it focused on the internal stability by strengthening well-used functions. Shin Jong-gyun, president of the IM (IT & mobile communications) division of Samsung said at the time, “Now people are not interested in complicated technology. What they want are durable functionality and design as well as practical technology that can be used daily.” 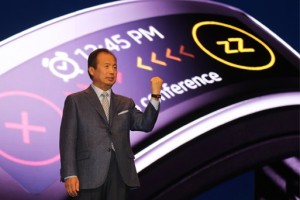 Samsung seems to lower the price by upgrading the specifications not so much and sell more devices. (image: Samsung Electronics)

Market observers said that the Galaxy S5 would be a turning point for Samsung, lowering prices of its products focusing on user convenience instead of splendid features with expensive parts. As there is criticism that smartphones have way too much higher specifications, Samsung seems to lower the price by upgrading the specifications not so much and sell more devices. It is expected that the price of the Galaxy S5 will be lower than its predecessor model Galaxy S4.

Meanwhile, Samsung Electronics is trying to straighten out the distorted mobile phone prices by lowering factory-shipment prices while cutting subsidies in the name of sales incentives. The subsidies to mobiles phones are divided into two parts. One is a sum of money provided to subscribers by mobile carriers under a certain length of contract term and the other is the manufacturers’ sales incentives.

As the mobile carriers and manufacturers adjust the amount of the subsidies according to the market situation and marketing strategies, the sum of subsidies received by the subscribers is varied daily. So, consumers buy the same mobile phone model in different prices of hundreds of thousand won in a day.

In some cases, the mobile carriers competitively offer large sums of subsidies to induce subscribers of rival companies, which resulted in the current suspension of business among themselves.

It is known that Samsung has already set up an internal policy lowering the factory price while reducing sales incentives this year. It aims to lower the price itself by minimizing the marketing cost.

In the mid- and long-term policy, Samsung plans to improve the distribution structure fixing mobile carriers’ subsidies and deciding the final prices of mobile phones at the roll-out stage like other countries. In reality, Samsung reduced its sales incentives to 30-40 percent this year, which shows Samsung is already implementing its internal policy.