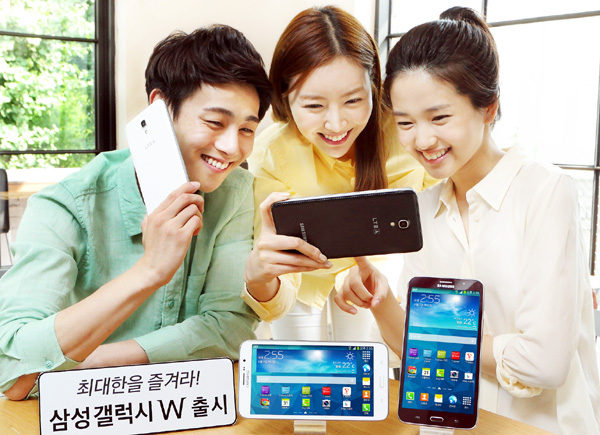 SEOUL, June 3 (Korea Bizwire) – Samsung Electronics is trying to tap a niche market with Galaxy W phablet, an oversized smartphone which, according to industry sources, might be able to replace the share of the formidable tablet market.

But Samsung used a newly coined word of ‘phoneblet’ when launching this huge 7-inch “mini” tablet, with the intention of differentiating it from other similar-sized models in the market.

Phoneblet is a combination of word borrowed from a phone and a tablet, and according to Samsung, this new hybrid can be defined as one with the much bigger screen size of over 8.0 inches. The previously launched Galaxy Note with an 8.0-inch screen size belongs to the phoneblet category, accordingly.

Opting to call it as “phoneblet,” Samsung wants to highlight much enhanced ‘hybrid’ features available on its cutting-edge smartphones and tablet computers, along with bigger screen size than that of phablets. Phablets are characterized by ones with screen sizes ranging from 5 to 7 inches. And Samsung used the term of phablet when it launched Galaxy Note lineups in the past.

Why is it then that Samsung calls this 7-inch smartphone as phoneblet, rather than phablet? In a way, this 7-inch Galaxy W is Samsung’s biggest phone yet in terms of the screen size. But “phoneblet Galaxy W’ has something to do with the new model’s enhanced specs.

The W phone boasts a 7-inch screen, with a 16:9 aspect ratio and resolution of 720×1280. When you flip it over and chances are you’ll get an eyeful of a faux-leather effect, as first seen on the Galaxy Note 3, meeting the needs of “immersive experience” promised by Samsung. 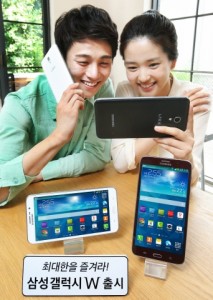 Phoneblet is a combination of word borrowed from a phone and a tablet. (image: Samsung Electronics)

This ultra-large phone also borrows software features from the Note like split-screen effects, pop-up videos and other multi-tasking options for putting two apps side-by-side. This device comes with a Quad-core 1.2-GHz processor backed by 1.5-GB RAMs, coupled with 16 GB of storage for your music, movies, and apps. Powered by Google Android Jellybean 4.3 operating system and a 1.5-GB RAM and a 3.200-mAh battery, this can be comparable to the finest digital camera models, with its 8-megapixel rear camera as well as a 2-megapixel front one.

Blurring further the line between phones and tablet PCs, Samsung’s new Galaxy W model can provide best experience for watching multimedia contents while offering a good-grip feel, thanks to a compact design which allows you hold it in your single hand.

Unfortunately, this phoneblet is available now only in the South Korean market. SK Telecom, the nation’s leading mobile carrier, has launched on June 2 Samsung Galaxy W and the price tag is set at 499,400 won (US$488).