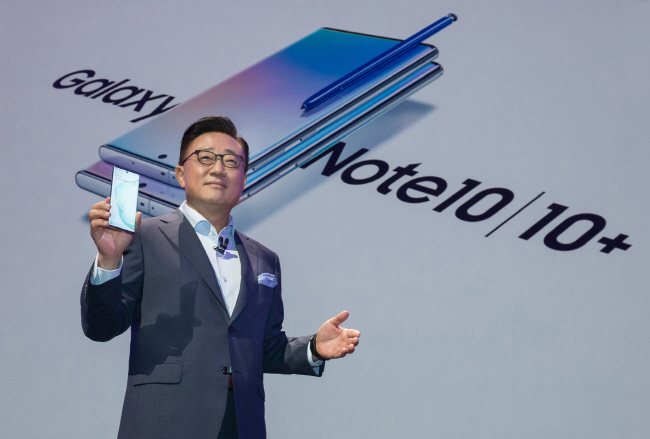 The South Korean tech giant showed off its premium large-screen smartphone sporting an S-pen stylus during an Unpacked event in New York on Wednesday (local time).

The new phablet comes in two sizes for the first time: the 6.3-inch standard Note 10 in the U.S., and souped-up Note 10 Plus with a 6.8-inch panel. Both are available in either 4G or 5G models.

The Note 10 features a hole-punch selfie camera to minimize bezel on the screen and ditches the 3.5 mm headphone jack for the first time, following its U.S. rival Apple. Instead, it offers a USB-C dongle.

It left physical buttons, locating the volume key on the top of the side and a power button at the bottom, which can also turn on Samsung’s digital assistant Bixby.

The big addition is “air gesture,” which lets users control the phone through the S-pen by moving it around without actually touching the display.

With S-Pen, users can jot down notes, instantly convert their handwriting to digital text and export it to a variety of formats, including Microsoft Word and PDF.

It also extends mobile-desktop platform Samsung DeX’s capabilities, making it easier for users to work between their phone and a PC or Mac.

“Every element of the Galaxy Note 10 was designed to help users achieve more,” DJ Koh, Samsung’s head of IT & mobile communications, said during the event live-streamed online.

“Whether they’re finishing a big project for work, capturing and editing a video, or playing their favorite mobile game, the Galaxy Note 10 will help them do it faster and better.”

The Note 10 has a main camera, telephoto lens and ultrawide angle lens on the back, and the plus model has an additional depth division camera.

It packs Qualcomm’s Snapdragon 855 processor, and the Note 10 Plus comes with a 512 GB storage option and an expandable memory slot, which Samsung said has “lap-top level storage.”

With just 30 minutes of charge, Samsung said the Note 10 Plus lasts through the day with up to 45 watt fast-charging capability.

The Korean tech giant said it joined hands with Microsoft to enable seamless connection between the Note 10 and Windows 10 computers, allowing users to see notifications, send and receive messages, and review recent photos with one click. 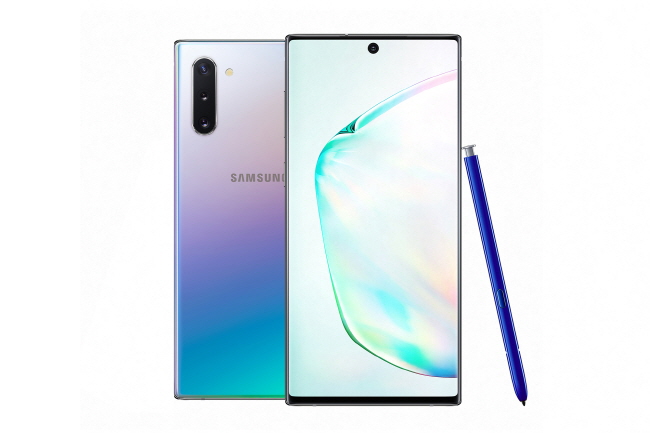 The Note 10 will hit shelves in the U.S., South Korea and other markets starting from Aug. 23, the company said.

In South Korea, the phones will be available only in 5G models, with prices of the standard and plus models starting from 1.24 million won (US$1,024) and 1.39 million, respectively, Samsung said.

Preorders will begin on Friday with three local mobile carriers.

The success of the Note 10 is crucial for Samsung as the world’s largest smartphone maker suffered a slump in its mobile business in the second quarter.

The firm’s IT and Mobile Communications Division saw its second-quarter operating profit tumble 41.6 percent on-year to 1.6 trillion won ($1.3 billion) following the weaker-than-expected performance of the Galaxy S10, launched in March.

The mobile division posted lackluster profits despite strong sales in emerging markets of its budget smartphones, the Galaxy A series, due in part to increased marketing costs for its 5G phone released in South Korea and the United States in the second quarter.

Koh said his company will improve the profitability of the mobile division with launches of premium phones in the latter half of this year.

“We have put priority in the market share in the first half, but we will focus on improving profits in the latter half,” Koh said in a meeting with reporters after the event.

“Although the global premium smartphone market is on the decline, 5G will be a growth driver to boost premium phone demand,” Koh said.

Samsung said it expects sales of the Note 10 to exceed its predecessor Note 9, but industry watchers say the company may face hurdles in promoting the new phablet due to the lengthening smartphone replacement cycle.

Some customers are also expected to wait until the showcase of the Galaxy Fold scheduled for September.

Samsung had hoped its foldable device would wow the market with its innovative design, but it delayed the April launch after early reviewers complained of durability issues with the $2,000 device.

While Samsung boasts ultra-fast capabilities of the 5G-compatible models, the major hurdle will be a limited 5G network in many countries.

Major mobile carriers in the U.S. are just getting started the next-generation infrastructure, and even in cities where they have launched, 5G coverage is sparse at the moment.

Market researcher Counterpoint Research predicted that combined sales of the Note 10 will reach 9.7 million units this year, similar to that of the 9.6 million units posted by the Note 9 last year.

The figure hovers below the 10 million units posted by the Note 8 in 2017, which posted strong sales due to the suspended sales of the Note 7 over battery problems.