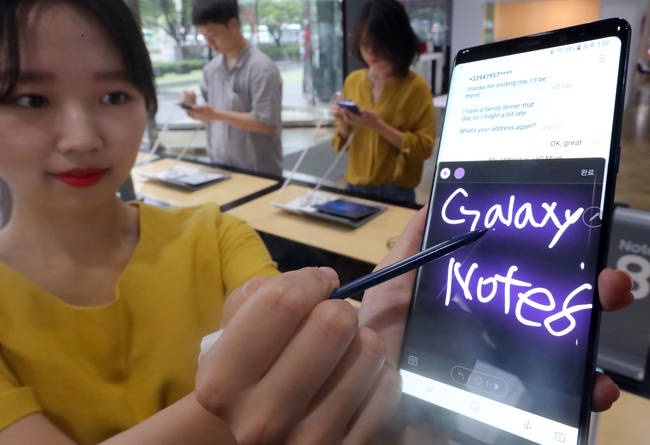 Last week, Samsung showcased the 6.3-inch Galaxy Note 8 with a dual-camera and improved stylus features. Preorders are expected to start Sept. 7 in Seoul, with the official release slated for Sept. 15. (Image: Yonhap)

Last week, Samsung showcased the 6.3-inch Galaxy Note 8 with a dual-camera and improved stylus features. Preorders are expected to start Sept. 7 in Seoul, with the official release slated for Sept. 15.

As the Galaxy Note 8 boasts the largest display among Note smartphones, industry watchers earlier expected the local price tag will hover above 1 million won (US$892). The initial price tag on the 64 gigabyte Galaxy Note 7 stood at 988,900 won.

The price of the 64 GB Galaxy Note 8 in the United States, already available for preorder, stands at $929. The price is even higher in European countries, industry sources said.

Shortly after the showcase, Koh Dong-jin, president of Samsung Electronics’ mobile business, earlier said the company will try to set the price of the Galaxy Note 8 below 1 million won, saying he does not wish to make the device too expensive for ordinary users.

“It is believed that Samsung is also undecided about the price,” an industry insider said. “Considering various aspects, however, it is unlikely that the price will be set below the 1 million-won mark.”