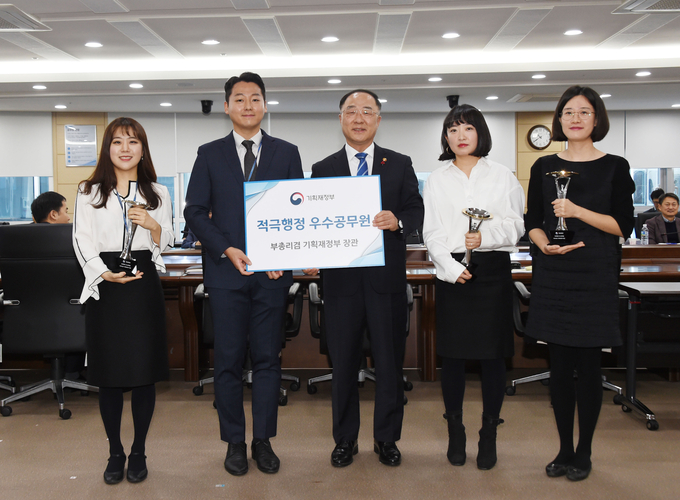 SEOUL, Dec. 6 (Korea Bizwire) — Civil servants who actively handled their work based on creativity and expertise for the public good, including the improvement of unreasonable regulations, have been awarded by the government.

Four officials from the Ministry of Economy and Finance, who were selected as outstanding public servants for “Active Administration,” received an award Thursday from Finance Minister Hong Nam-ki.

Kim Sun-ah raised the issue of the automatic issuance practice of paper receipts, which cost 120 billion won (US$100 million) a year. The problem is that 60 percent of printed receipts are immediately discarded as waste.

Since then, she has actively consulted and coordinated with related ministries to help them come up with improvement.

Jang Joon-hee helped the project get back on track by coordinating differences among related agencies and actively resolving major issues in the process of re-promoting the Hwaseong International Theme Park project, which had been adrift for the past 10 years.

Moon Hee-yeon contributed to removing the partition between budget projects and reducing the cost of purchasing land for the construction of facilities.

Bang Woo-ri was praised for separating customs clearance from customs law for the first time in 70 years and actively responding to the changing customs administration by pushing for the enactment of new customs laws.

The ministry said it will give the officials various incentives, including rewards and additional merit evaluation points.