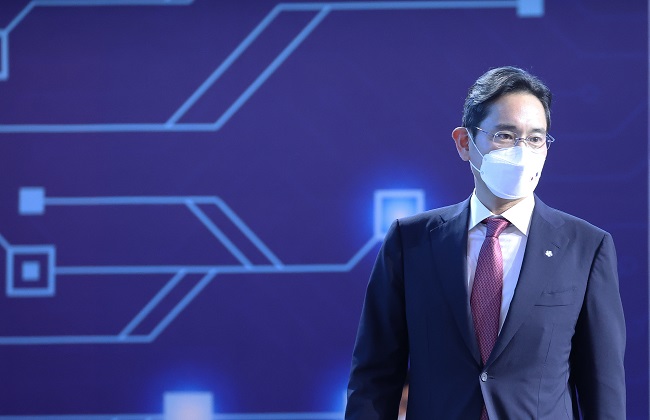 Samsung Electronics Vice Chairman Lee Jae-yong appears at the podium to give welcoming remarks at Samsung’s chip plant in Pyeongtaek, 70 kilometers south of Seoul, on May 20, 2022, when U.S. President Joe Biden and President Yoon Suk-yeol visited the plant on the first day of Biden’s three-day trip to South Korea for a summit with Yoon. (Yonhap)

On Thursday, Lee asked for permission to be absent from his ongoing trial at the Seoul Central District Court over the controversial merger between two Samsung affiliates, a deal seen as a scheme to consolidate his leadership at the country’s biggest chaebol.

The court said Lee will not be able to attend two trial sessions, set for next Friday and June 16, due to his trip to the Netherlands from June 7-18.

Samsung and ASML both declined to comment on Lee’s itinerary.

Lee’s overseas trip came 10 days after the South Korean tech giant announced a massive investment plan for the next five years to sharpen its competitiveness in the chip industry.

Samsung said it will invest 450 trillion won (US$355 billion) in semiconductor and biopharmaceuticals in the span of five years, 80 percent of which will be used for research and development and nurturing talent in South Korea, especially in advanced chipmaking.

In particular, the company said it will import the EUV machines at an earliest date, which it said “will give Samsung an advantage to make most advanced microchips.”

Samsung has said it will continue to beef up its chip business “by expanding supply of high-performance products and increasing application of its industry-leading EUV technology.” 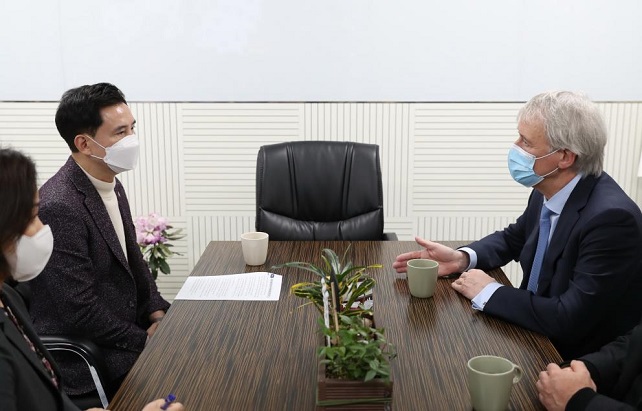 Global chipmakers, including Samsung, Intel, SK hynix and TSMC, are competing against each other to secure the Dutch company’s $150 million EUV machines, which are in short supply over surging demand for high-end chips used in internet of things, servers and artificial intelligence, among others.

“It’s unprecedented. I have never seen this before,” he added.

Meanwhile, ASML is expanding its operations in Korea, one of the company’s largest markets, amid the continued chip shortage.

Wennink visited South Korea in April for a chip cluster project and meetings with local employees.

In November, ASML signed a memorandum of understanding with the city of Hwaseong to invest 240 billion won (US$212 million) in building a 16,000-square-meter chip cluster there by 2024.

The facilities will include an office that can house up to 1,500 employees, training and repair centers for EUV machines.

South Korea is ASML’s key market that represented 33.4 percent of its 2021 total net sales, according to the company. It was 29.7 percent the previous year.

It has more than 1,400 local employees, with 70 percent of them young millennials, the company said.

In October 2020, Samsung’s de facto leader Lee visited the headquarters of ASML to discuss supply plans of EUV equipment, cooperation in advanced semiconductor manufacturing technology and the industry outlook amid the COVID-19 pandemic.