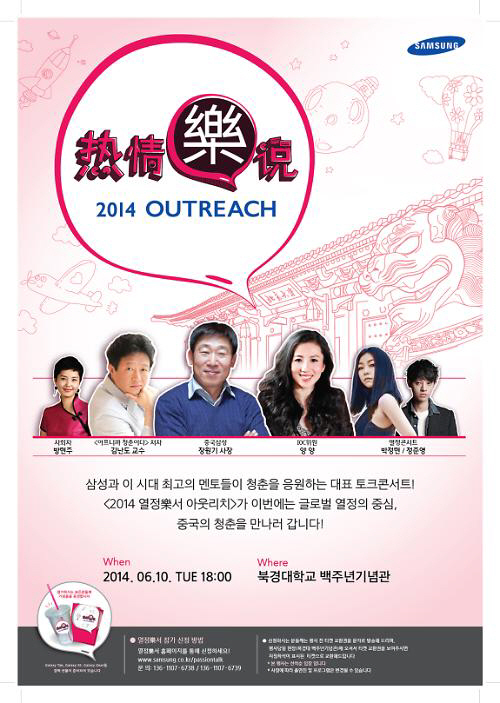 The talk concert held at the 100th Anniversary Memorial Hall of in Beijing University on June 10 (image: Samsung China)

The talk concert held at the 100th Anniversary Memorial Hall in Beijing University on June 10 attracted more than 3,000 Korean and Chinese students. Initially, it was planned to accommodate some 2,000 students but due to its explosive popularity, the organizer had to accept 1,000 more audiences.

According to an official at Samsung China, during the concert, Jang Won-ki, president of Samsung China, Kim Nan-do, professor at Seoul National University and Yang Yang, a former short-track skater and International Olympic Committeemember, gave lectures on the value of perspiration and passion to students from Korea and China.

President Jang conveyed his personal stories and know-how in growing up as a China specialist in his lecture titled “Technocrat CEO with vast knowledge on China.” He introduced his success story as a “Samsung man” leading its semiconductor and LCD businesses and his effort to fulfill his target to be a China specialist knowing China better than the Chinese.

Professor Kim Nan-do, famous for his best-selling book “It Hurts Because It’s the Youth,” gave explicit answers to various agonies of lives for the students. The translated edition of his book also made a hit in China selling more than one million copies.

For Yang Yang, she showed her second phase life story as an IOC member from a sports heroine to a sports diplomat. She also disclosed her well-intentioned competition with Korean skaters for Olympic gold medals.

Samsung’s “Passion Talk” began at the southwestern Korean city of Gwangju in October 2011 and the concert in Beijing was its 70th event. Its cumulative audience number reached 240,000 and the next concert will be held in Busan’ BEXCO on June 24.