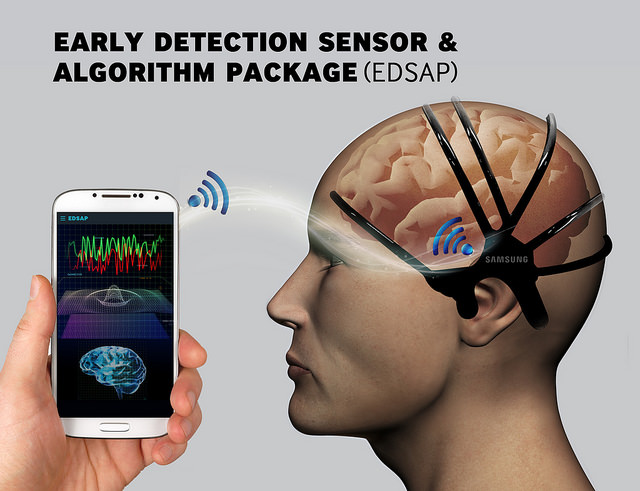 The stroke warning cap can differentiate normal brainwaves from the risks of strokes at a level of accuracy of 90 percent. (image: Samsung Electronics)

SEOUL, Jan. 26 (Korea Bizwire) — A stroke warning cap, which was one of the C-Lab projects selected by Samsung Electronics at the beginning of last year, is moving closer to commercialization. The C-Lab is a system that supports the commercialization of new products by adopting ideas proposed by members of management and staff.

According to a January 23 post on Samsung Tomorrow, the official blog of Samsung Electronics, the stroke warning cap can differentiate normal brainwaves from the risks of strokes at a level of accuracy of 90 percent.

It has been conveyed that this cap can diagnose not only strokes but also depression. By analyzing brainwaves, illnesses can be singled out. As such, with technological capabilities that will be more developed in the future, it might possibly be used in a wide variety of different ways, including the investigation of brain illnesses or abnormalities.

Brainwaves are the electrical signals that take place in the brain, and they are important indicators for measuring the states of brain activity.

Once the stroke warning cap is commercialized, brainwave information can be obtained easily.

The cap does not use any gel or saline solutions as have been used in general hospitals until now, which has made it much more convenient to use.

However, in order to enter the commercialization phase, there are still many obstacles to overcome.

Professor Hong Seung-bong of the Samsung Medical Center, who was in charge of medical advice throughout the cap’s development process said, “For actual application, there are hurdles to go over, including the clinical tests. However, the significance is considerable in the sense that a platform has been developed for warning the risks of many illnesses by precisely measuring the brainwaves and analyzing them.”