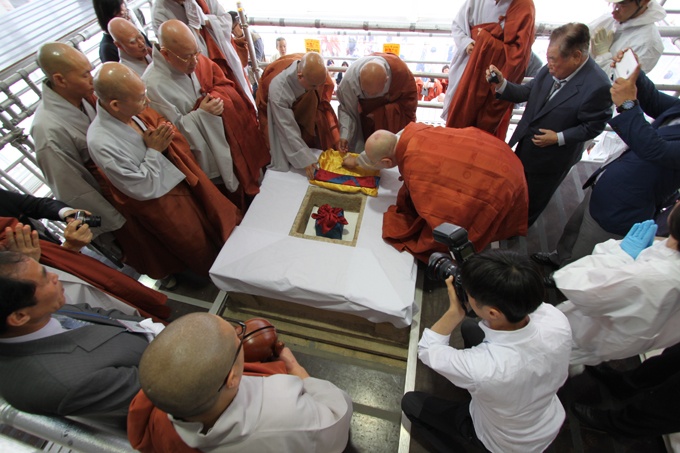 Buddhist priests enshrine sariras in a container inside the Seokga Pagoda under repair at the Bulguk Temple. (image: Yonhap)

GYEONGJU, Sept. 16 (Korea Bizwire) — Sacred sarira relics were placed back in an ancient Buddhist pagoda at the Bulguk Temple in Gyeongju on Wednesday as ongoing repairs are near completion.

Sariras are crystals that are sometimes found among the cremated remains of Buddhist monks. They were put in a hole inside the main structure of the Seokga Pagoda, along with their container and a document on the history of repairing the pagoda after a brief Buddhist ritual.’

“Sariras are bright, transparent and incomparable to any treasures. We put them in the Seokga Pagoda that carries the dreams of the Silla Dynasty on Sept. 16, 2015. If enshrined today, they will be exposed one or two thousand years later if things go normally,” a chief monk of the temple said in his speech during the ritual.

The authorities took out a total of 46 sariras in 2013 while disassembling the pagoda to repair cracks found in the foundation stone. But only 28 of them were enshrined again there, with 18 to be placed in a museum run by the temple.

The National Research Institute of Cultural Heritage in charge of repairing the national treasure said it will complete reassembling the three-story structure so it can regain its original status by the end of the year.

The Seokga Pagoda is believed to have been completed in the mid-8th century, about 200 years after the construction of the Buddhist temple in 535 in Gyeongju, about 370 kilometers southeast of Seoul. The city was the millennium-old capital of the Silla Dynasty that emerged from Korea’s southeast and later unified much of the Korean Peninsula. The Bulguk Temple has been inscribed on the UNESCO World Heritage list.

It has undergone two previous rounds of repairs. The most recent repairs were done in 1966, when it was partly damaged by robbers in their unsuccessful attempt to steal the sarira container. In the repair process, lots of cultural assets, including the “Mugujeonggwang Great Dharani Sutra,” known as the world’s oldest existing print done with wood blocks, were found in the compartment inside the tower.