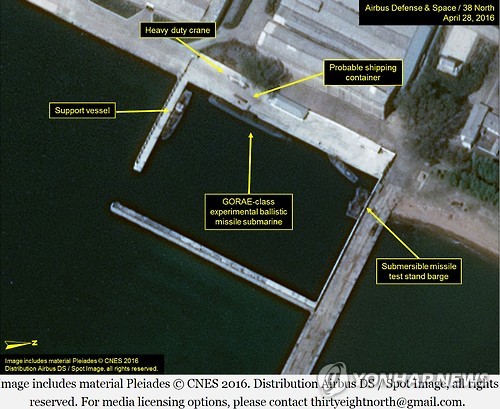 This image taken of the North`s Shinpo Shipyard on April 29, 2016, six days after the North`s latest submarine-launched ballistic missile (SLBM) test, shows that a submersible missile test stand barge has been moved from its normal position, in this photo provided by the website 38 North and Airbus Defense and Space. (image: Yonhap)

The imagery taken of the North’s Shinpo Shipyard on April 29, six days after the North’s latest SLBM test, shows that a submersible missile test stand barge has been moved from its normal position.

“This shift in location suggests that the SLBM program may be moving towards a more advanced stage of development where the need for a submersible test stand barge has diminished,” 38 North said. “That conclusion appears to be reinforced by recent test launches from the submarine itself rather than the barge.”

It described the North’s SLBM test as “successful.”