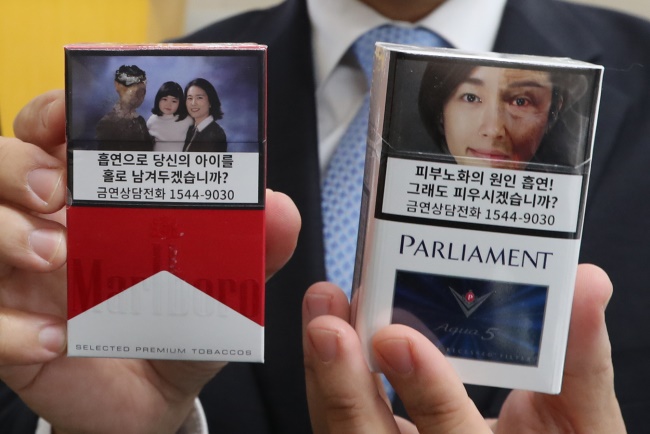 The report also revealed the shock value of the images found on tobacco warning labels in South Korea was relatively low compared to the World Health Organization’s guidelines, urging the government to step up its anti-smoking efforts. (Image: Yonhap)

Known as “manner labels” in Korean, which roughly translates into English as modesty labels, the stickers, which are made by private companies and are being distributed among convenience stores, are emerging as a new threat to the government’s efforts to reduce smoking.

Smokers are charged no extra fee for the anti-tobacco warning label stickers, as private companies who produce the stickers make profits from advertisements printed on their products.

Advertisements of new apartments and local bars on flyers which used to litter the streets are moving onto the stickers for tobacco warning labels, forming a perfect relationship between tobacco companies, convenience stores and the warning label-covering sticker makers based on each party’s interests.

Speaking to SBS, an official at the Ministry of Health and Welfare acknowledged the presence of loopholes in current laws, saying “It’s hard to regulate the practice of making and selling stickers for cigarette packages.”

Though a bill that prohibits the practice of covering tobacco warning labels has been proposed, it has yet to be discussed in the National Assembly.

According to a recent report by the Korea Health Promotion Institute on the effectiveness of graphic warning labels on cigarette packages, many smokers were put off smoking after seeing an image depicting the revolting side effects of smoking, with smokers who participated in the experiment reporting a decrease of over 50 in their urge to smoke.

The report also revealed the shock value of the images found on tobacco warning labels in South Korea was relatively low compared to the World Health Organization’s guidelines, urging the government to step up its anti-smoking efforts.

Back in 2012, a similar phenomenon was observed in Australia soon after strict cigarette packaging laws came into effect.