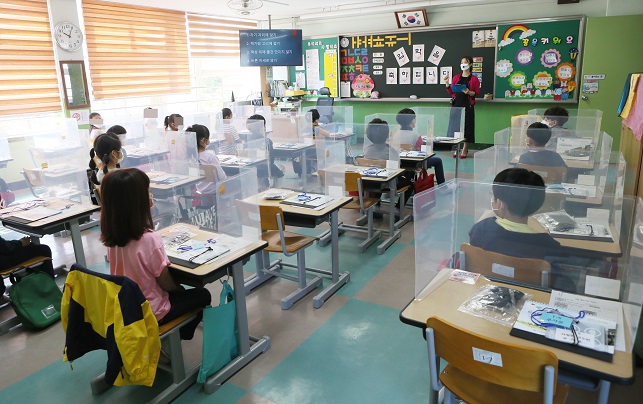 Elementary school students sit at desks fitted with plastic dividers in Incheon, west of Seoul, on May 27, 2020. (Yonhap)

SEOUL, June 23 (Korea Bizwire) — The Ministry of Education on Tuesday extended a measure to reduce classroom crowding until the end of the first semester, as the country continued to see a worrisome uptick in coronavirus cases in Seoul and its adjacent cities.

The ministry said the measure to cap the number of students will continue to stay a bit longer than its original deadline of June 30, and that it will determine when to end the measure in accordance with quarantine protocols in the capital area.

The country’s school year starts in March, and the first semester runs until the summer vacation, which normally starts in mid-July.

On May 28, the ministry established the limit to keep students at a safe distance from each other while clusters of infections spreading in the capital area worried education and health officials about a rise in community spread.

As the COVID-19 pandemic was considered manageable, the country eased its social distancing guidelines in early May. In line with that, the country reopened schools nationwide in a gradual manner starting on May 20.

More than 5 million pupils are now going to school, although class schedules remain largely flexible depending on an individual school’s quarantine conditions.

On Tuesday, the country added 46 cases, including 16 local infections, raising the total caseload to 12,484, according to the Korea Centers for Disease Control and Prevention (KCDC).

According to a survey by the ministry, some 93.5 percent of schools in the capital area were enforcing the cap as of June 9.