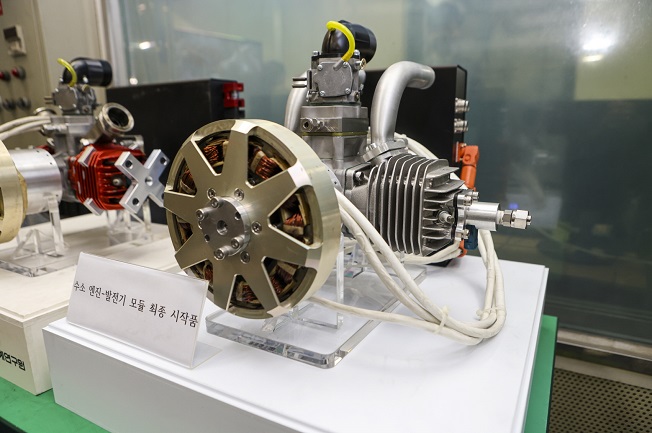 This photo provided by the Korea Institute of Machinery and Materials shows a newly-developed hydrogen fuel engine.

DAEJEON, Nov. 26 (Korea Bizwire) — The Korea Institute of Machinery and Materials said Thursday that it has developed a 5-kilowatt hydrogen fuel engine that can power heavy lift industrial drones.

The newly-developed engine supplies hydrogen fuel using the direct spray method while optimizing engine parameters such as ignition and spray.

This power output is strong enough to power industrial drones with a weight of 20 to 30 kilograms.

At present, unmanned mobility devices such as drones usually rely on batteries for power.

The energy density of hydrogen fuel is 2.8 times higher than that of gasoline by weight, thereby offering the potential to extend flight time compared to conventional gasoline engines.

Another strength is that hydrogen engines are based on eco-friendly technology and are free of carbon emissions.