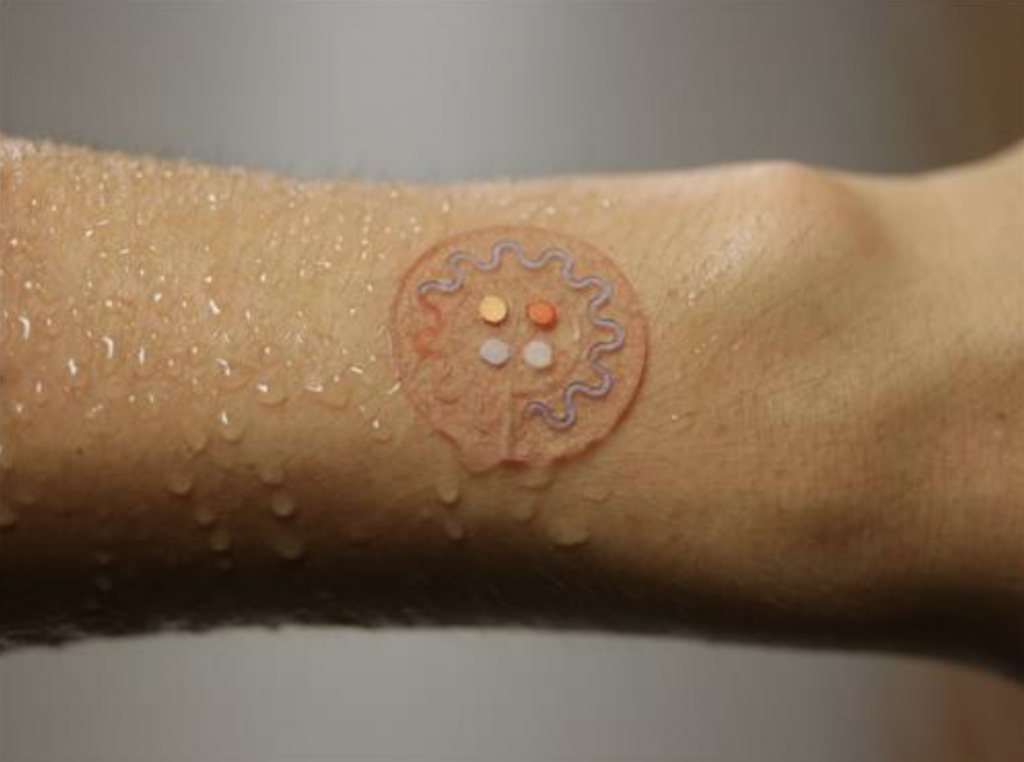 The sensor is round and 3 centimeters wide, with a thickness of 700 micrometers. It weighs roughly 3 grams, posing no inconvenience to the wearer, and its high elasticity allows it to stretch based on skin texture. (image: Yonhap)

SEOUL, Nov. 24 (Korea Bizwire) – An international science team including researchers from Hanyang University and Ajou University has developed a wearable microfluidic device that can capture and analyze sweat for health monitoring.

Sweat contains various chemicals that could be an indicator of one’s health condition. For example, glucose concentration can be used to diagnose diabetes, while chloride ion concentration can help detect diseases like cystic fibrosis. The level of acidity in sweat can also be indicative of hydration levels in an individual’s body.

The device developed by the team has several microfluidic channels the length of a couple hundred micrometers (one-millionth of a meter) for sweat collection. Each of the channels features color-responsive materials that change color depending on chemical concentration.

“For instance, the channel that measures acidity turns light orange when the sweat is at pH 5.0, but turns yellow-green at a strong alkali of pH 8.5,” said Ajou University professor Kang Dae-shik.

The device then uses a near-field communication chip to send the data to a smartphone, so that the wearer can monitor the results of the analysis.

The sensor is round and 3 centimeters wide, with a thickness of 700 micrometers. It weighs roughly 3 grams, posing no inconvenience to the wearer, and its high elasticity allows it to stretch based on skin texture.

“Using the device, athletes and soldiers in training will be able to monitor their health on a regular basis,” said State University of New York (Binghamton) professor Koh A-hyeon, who also took part in the research. “We can also develop it into a device that could even prevent diseases.”

The team’s full research findings were published in the November 23 online edition of Science Translational Medicine.